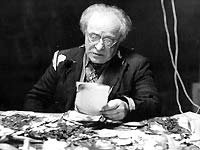 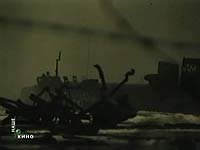 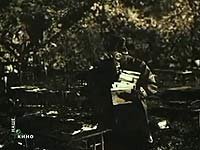 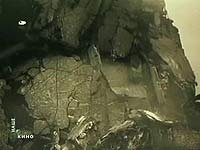 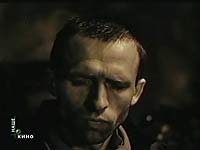 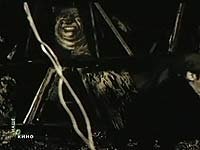 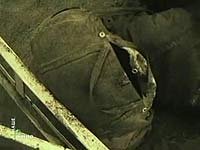 Depressive in tone but with a hopeful optimism at its end, this film explores how human beings might survive the immediate aftermath of a nuclear bomb explosion that wipes out entire cities and all life above ground and renders the physical environment sterile and toxic. In such a setting people live without hope and watch one another disintegrate emotionally and mentally as well as physically. The bare and patchy plot centres around a physicist huddled with a few other survivors in a bunker beneath a museum after such a wipe-out. The physicist tends to his wife, dying from radiation sickness, and composes letters to their young son who was separated from them during the explosion and the chaos that followed, and is now missing. One day while searching for the boy and other survivors, the physicist meets a group of orphaned children, all traumatised by the explosion, and arranges for them all to go to a so-called Central Bunker where they might be cared for by government doctors. Martial law and a strict curfew have been imposed across the country and the physicist risks his life to get medicine for his wife; while he's gone, the wife dies. The remaining survivors in the museum bunker ponder their circumstances and try to cope with various rationalisation strategies. Eventually they're all ordered to go to the Central Bunker but the physicist elects to remain and moreover takes in the orphans when the Central Bunker rejects them for being sick.

The plot depends heavily on the actors and their environment to convey its message and ideas. The actors have worn, sometimes craggy faces which portray hope, despair, anger and resignation in turns. The interior settings are dark and look cramped with primitive living conditions; exterior settings are dominated by roaring winds, the wreckage of buildings, cars and machines, puddles of toxic water and undecayed bodies. An air of oppression reinforced by helicopter and tank patrols and periodic megaphone announcements adds to the overall feeling of despair and hopelessness. Use of sepia tones in the filmstock emphasises the desolation and wretchedness of life and accentuates the strains of care and surviving on the actors' faces. Viewers see the details of soil texture, of water that looks like mercury and, in a flooded university library, of the wet pulp of paper and sodden towers of books. One scene in the film appears in shades of blue that highlight the secret and possibly illegal or dangerous work being done by two characters.

The cinematography captures perfectly the small scale of human life in an extraordinary and extreme environment. It reaches its peak of morose and pessimistic expression in a Christmas scene in which the physicist and his orphans build a Christmas tree out of wire and industrial scrap and light candles on the tree. The camera draws back to show the scene in full: stark in its loneliness but beautiful all the same. It's like a small beacon of light in a never-ending black night. Viewers sense that the plot has reached its lowest point and from here on, hope may arise; it harks back to the pagan origin of Christmas as a mid-winter festival in which people celebrated the death of the old year and the birth of the new year. What happens to the physicist and the children next underlines this passing-of-the-torch motif.

There are other moments of great beauty in the film: the nuclear disaster itself with its montage of cities on fire and being blown down by huge winds, over which a soprano sings and a child babbles in the background, is a memorable sight; and the orphaned children venturing out into the barren landscape and over the horizon beneath an overcast sky through which thin rays of sun shine is a very beautiful and moving scene. Even the sepia tones themselves lend a kind of golden aura over the actors and the sets as they bring out the harshness and desolation of the lives the characters lead.

A few survivors declaim on the purpose and nature of humanity on Earth and where and how humanity went wrong somewhere so that the nuclear calamity was made possible. People were ambitious and greedy, they reached out and made things they didn't fully understand, they tried to know too much but lacked the wisdom and insight to control their knowledge and what they did with it ... the physicist himself realises the calamity occurred accidentally in a way that's no-one's fault. Here is a message about the absurdity and fragility of existence and how one seemingly trivial yet universal event can set off a chain reaction that results in a nation-wide if not global tragedy. One survivor expounds his view that a new dog-eat-dog world without compassion will be built on the remains of the old one. Another survivor praises the achievements of the human species and then commits suicide. At one point in the film, the physicist expresses guilt that his work might have contributed to the nuclear disaster.

In the end, hope is all the physicist has to sustain him: hope that his son is still alive, hope that his wife might survive long enough to see their son, hope that the orphaned children will also survive and help create a new world with new values that won't end in nuclear catastrophe. The children carry his hope as they trudge away from the museum bunker.

This is a thoughtful film with scenes of great beauty and sadness.

Review by jennyhor2004 from the Internet Movie Database.