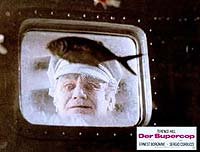 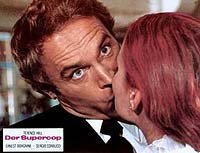 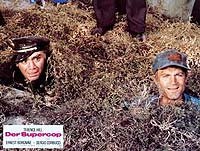 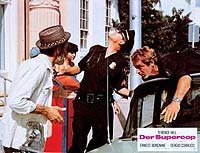 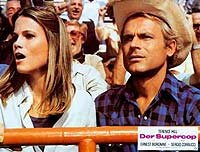 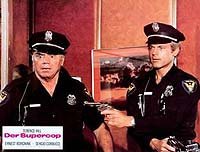 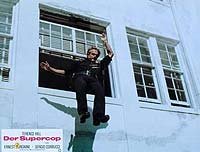 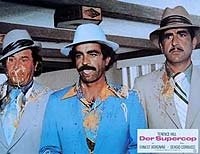 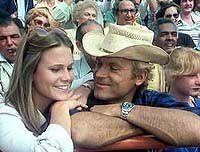 "Trinity" film series star Mario Girotti (a.k.a. Terence Hill) headlines this amiable superhero parody which should make for decent family viewing. The jokes come fairly fast, and the performances are appropriately hammy. Ultimately, it's kind of a mixed bag; sometimes it's funny and engaging, sometimes it's silly and tiresome. But its upbeat spirit does make it rather hard to resist. It's certainly an interesting credit for the director, Sergio Corbucci, who was better known for Westerns such as "Django" and "The Great Silence". Filmed on location in Miami, it features a loud and bouncy pop score with a theme song that is catchy at first but is eventually used too much.

Hill plays Dave Speed, a rookie cop partnered with weary veteran Sgt. Willy Dunlop (Ernest Borgnine). While on an assignment, Dave is showered with red dust from an atomic explosion, and thereafter acquires superpowers. He's now able to detect crime from a distance, sense elephants coming around a street corner, and catch bullets in his teeth. All of which actually kind of annoys old Willy, not to mention his sweet niece Evelyn (gorgeous Julie Gordon). But Daves' abilities come in handy when he tries to bust the counterfeiting ring run by volatile mobster Tony Torpedo (Marc Lawrence).

There are some good gags in this thing, although it does wear out its welcome in the end. Still, the actors make it worth watching. Joanne Dru also stars as actress Rosy Labouche; Lee Sandman plays police chief McEnroy and put upon thug Paradise Alley is portrayed by Salvatore Borghese. Hill is very likable throughout and Borgnine is quite lively. To add to the humour, Dave finds that whenever he sees the colour red, he temporarily loses his powers. The effects are not particularly special but in something like this, that's not really much of an issue.

Fans of the "Naked Gun" and "Police Academy" series might find this one to their liking.

Review by Scott LeBrun from the Internet Movie Database.