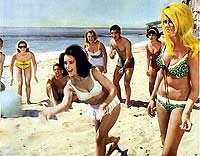 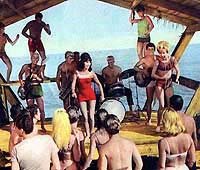 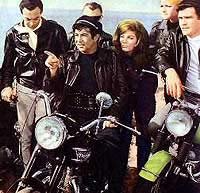 As Annette Funicello (as Connie) and the "Beach Party" gang strip into their bathing suits for a pool party, outer-worldly Tommy Kirk (as Go Go) dons a movie usher's uniform; then, he is transported to Earth. Mr. Kirk's mission is to prepare Earth for an invasion of Martians. He is sent to dresser Elsa Lanchester (as Aunt Wendy)'s home. Ms. Lanchester thinks young Kirk belongs on the beach. She renames him "George", and sends him out, in tight blue trunks, to have fun in the sun. On the beach, Kirk meets Ms. Funicello, and romance ensues…

Not the best of the run, as it's missing some essentials; but, American International's "Pajama Party" is probably the series' sexiest entry. The cast is more often featured in swimwear than bedclothes, you should note. And, with the exception of Funicello, the cast is in their hottest beach attire. The exceptional Funicello shows off her assets in pink nightwear, during her "Stuffed Animal" song performance; and, she gets a dance number, too.

Probably due to scheduling conflicts, it appears Frankie Avalon's role was moved over to Jody McCrea; and, Mr. Avalon appears in dubbed voice-over and cameo only. At one point, it's suggested that Kirk is borrowing Funicello boyfriend McCrea's clothes, which would have been believable with Avalon, but not the much larger McCrea. Other regulars get more to do, too, like Buster Keaton, Donna Loren, and Mike Nader. The cameos are way cool; like "My name is Dorothy" Kilgallen as a fun motorcycle mama.

While the FrankieAnnette dynamic is missing; Kirk is a worthy substitute, and his meeting Funicello on the beach is a delight. Watch as Kirk explains how well-versed he is on Earth, mentioning, "George Washington, Abraham Lincoln, Mickey Mantle, Frankie Avalon…" and, he tells Funicello, "You have a well-rounded…" By the film's end, his unfinished phrase can be filled in.

Review by wes-connors from the Internet Movie Database.