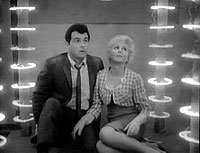 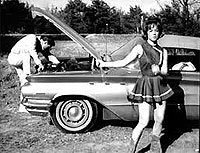 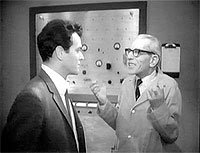 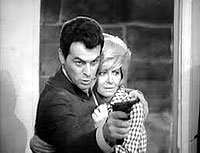 Sort of like "They Saved Hitler's Brain"...but without any brains!

Wow. 1963 was an amazing year in the annals of movie history. Not only did it bring us "They Saved Hitler's Brain" but also "The Yesterday Machine", so apparently this year was a banner one for insane neo-Nazi scientists and their kooky schemes. In many ways, both these films are very similar--lousy acting, lousy sets and lousy dialog. The only notable way they are different is that "The Yesterday Machine" lacks a cameo appearance of Hitler's head in a pickle jar!

The film begins with a young man being shot (apparently by disgruntled Confederate soldiers who were brought forward in time) and his girlfriend disappearing. This can only mean one thing...a crazed Nazi scientist is running amok experimenting with the fabric of time. So, it's up to a crack team made up of a dull guy and his amazingly untalented and annoying blonde girlfriend to save humanity. While this sounds ridiculous, this neo-Nazi movement only appears to have three members, so the odds aren't that stacked against them!

Jack Herman stars as the brilliant but wacky Nazi scientist. Not only can he make time do goofy things, but he can make the drawings on his chalkboard instantly change due to bad editing. And, he also is less subtle than Dr. Strangelove--and a horrible actor to boot. James Britton is the film's "action hero" and based on this performance, I can see why this is his only film credit--he has the charisma of cheese curds. As for the only "name" in the film, once important actor Jack Holt, he's barely in the film at all--just a walk on in the beginning and end of the film. But, since he'd been in "The Magnificent Ambersons" and some other REAL movies, they decided to list him first in the credits. You gotta feel sorry for the guy being stuck in ultra-low budget crap like this and "This Stuff'll Kill Ya" at the end of his once promising career.

My favorite bad scene in the film? The one where the Egyptian slave attacks the guard to save the dumb blonde's life. The blonde just stands there as this happens and even does nothing when the stabbed guard then strangles the slave! Talk about ingratitude!! Other great bad scenes are the "magic chalkboard" and the ranting and raving of the scientist--rarely have I ever seen any actor chew that much scenery.

Overall, it's a terrible movie in most every way. Understandably, most people who made this film never went on to do much of anything else. The film is bad, but perhaps silly enough to excite a few bad movie buffs.

Review by planktonrules [IMDB 8 December 2009] from the Internet Movie Database.