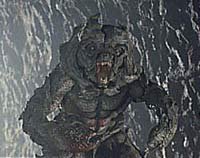 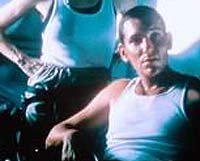 I received this movie from a friend, claiming that it was a great movie I couldn't afford to miss. I asked him what it was about, and he said the story involved rock aliens, which immediately attracted my interest. After watching it, I thought the movie was average in every aspect, but leaning more towards the 'bad' side.

The movie is about a huge asteroid heading towards good ol' Earth, and (not to the viewer's surprise) people are sent up in a space ship to drill the asteroid to pieces. The spaceship "Galileo's Child" is a cheap piece of plastic, which they have projected onto the Windows 95 Starfield screensaver to create the flight-through-space scenes. That's the way it looks like. Aboard the ship are the typical bad ass "space pirates" plus a "misunderstood" scientist played by Caroline Barclay. They land on the red asteroid (which looks like a floating meatball) and start drilling away. With big drills. There is no logic in this, however.

This movie is set in the far future, so why not have automated drills, so they don't need to spend money on oxygen canisters etc. "Because then there'd be no killing scenes." Oh boy.

But hell is set loose when on the 3rd day (I think), the guys stumble across a grave filled with artifacts and other styrofoam crap. Of course, everybody (except the 'cool' scientist) goes nuts and start stealing the valuable alien plastic, but OH NO, the ancient guard of the stone grave is resurrected, to protect the grave from Zzzzz...

I won't tell you about the rest, but it is all so predictable. Most of the scenes are blatantly "ALIEN" rip-offs, and it all happens so slooowly, that the scenes get boring. There's only one good kill scene, and that's where one of the bad asses gets a drill through her head. Slowly, too - but painful. The alien itself looks like a walking piece of styrofoam rock. And it looks happy the whole time.

Even though it has it's extremely bad moments, the movie is enjoyable at times. The actors are complete crap, so you'll love it when they die.

Review by chemical_rat from the Internet Movie Database.