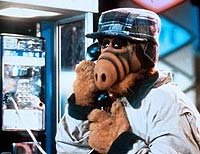 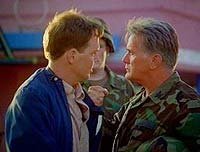 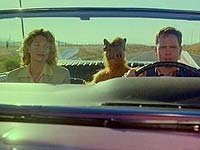 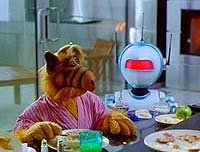 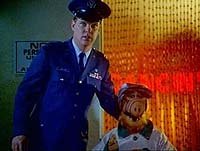 So back in the late 80's there was this TV series that starred what was essentially a Muppet. But this was not just any Muppet oh no. Firstly it had nothing to do with Jim Henson and was not a Muppet, and secondly this fuzzy character was completely politically incorrect. The absolute horror!!

So ALF (Alien Life Form) was an alien from the planet Melmac that crash-landed on Earth in typical alien fashion. Not only did he crash-land on Earth, he crash-landed right in the garage of a nice middle-class suburban American family called the Tanner's. Upon discovering that ALF (real alien name Gordon Shumway but affectionately known as ALF) was harmless and friendly the Tanner's hid him, essentially making him a part of their family. And from there we got a 4 seasons of wacky alien hijinks as the Tanner's try to keep ALF hidden from the government and ALF merely tries to fill his eight stomachs and make some money on the side.

This movie followed on from where the TV series left off (an unresolved cliffhanger) and sees the military getting a hold of ALF and taking him away for experimentation under the orders of Colonel Milfoil (Martin Sheen). Basically Milfoil wants to exterminate ALF because he sees the alien as a threat. On the other hand two other military scientists don't want to see ALF executed because its against his alien rights, it would be cruel, and humans could learn from him. So the duo decide to help ALF escape and go on the run. Eventually they seek help from an ex-NASA scientist (Miguel Ferrer) who seemingly wants to help ALF but also turns out to have his own dastardly plans. So its all very corny cliched and stereotypical stuff.

So let me just get this out of the way first. ALF was one of those US shows of pure genius the likes of which we'll probably never see again. The show was for the family but probably swung that little more towards the older age range because of its dry witty humour. The kids loved ALF of course but his cruel, sarcastic, mocking, cutting quips were anything but childish and would probably be deemed offensive today. I guess you could kinda say 'Married with Children' was a similar type of show in the sense that everyone could enjoy it, but it was clearly aimed at the older age range overall (and it was also highly offensive by today's standards).

Of course the puppet of ALF was the standout feature of the show which was surprising if you think about it. Here was essentially a rather daft looking puppet that was fat, had a long snout, big dark eyes, big pointed ears, covered in thick brown hair, and had a kind of curtains style mop on his bonce. Just like any Muppet he was limited in facial movement and could only move his head arms and hands as his bottom half was never shown (he was always behind something). But it was never really about his look, it was all about his attitude, his biting satire, and his goofy voice all provided by creator Paul Fusco.

This movie starts off on top form showcasing ALF at his witty best whilst being experimented on. This initial sequence which shows ALF being questioned by various scientists is easily the highlight of the movie and gives you what you crave, ALF at his most cynical (and food obsessed). Dr. Warner the first scientist to question ALF (Ed Begley Jr.) gets accidentally electrocuted to death whilst trying to remove a warning sign off an electrical piece of equipment. From there on ALF constantly refers to this incident sarcastically (mainly out of fear and pure bewilderment) because the following scientists try to cover it up as a nothing burger (secret military facility you see).

Scientist: Are you hungry?

The scientist continues... Scientist: On - ALF: Off Scientist: Up - ALF: Down Scientist: Toast - ALF: Dr. Warner

Alas the movie does tend to deteriorate pretty quickly once ALF is broken out of the military facility. One reason for this I believe is the fact that when ALF is outside or on the move its hard to do things with him because he is a puppet. You always need something for him to stand behind, lean against, sit on etc...I think this limited the movie as once ALF is out it becomes a chase flick. Now whilst you could say that the Muppets prove this can be done effectively, you still have to accept that many scenes in Henson movies work when the Muppets are indoors on a set of some kind. Plus the Henson movies probably had a much better budget than this movie.

As with the Muppets the people behind this movie do know their way around puppeteering and I assume worked on the TV show previously. ALF is shot well and still looks as good as you would expect. I can't recall the TV show too well these days but I'm sure ALF probably looks better than he did on the show given the circumstances. There aren't too many special effects aside from ALF of course. Like the Muppets there is the odd shot of a short person in a full body suit for the odd long shot or brief walking shot of the alien. And much like the Muppets it does work...unless you go back and rewatch it over slowly.

In general the humour becomes more mundane and predictable as the movie progresses. The usual situations where humans are at first shocked by ALF, then realise he's harmless and slowly accept him...whilst still in shock. Yeah its kinda amusing but gets old fast. The setup ALF has on the military base is also VERY Bilko-esque to the point of being a direct copy frankly. Almost every scene where ALF is not present is unfortunately really dull and you just wanna get back to ALF as quickly as possible. That's where the Muppets win because there are many Muppets and their stories surround them, humans are the extras. Here the story also involves humans and you are unable to escape focusing on them. ALF is not the only main character and that's the problem.

Still there are of course some highlights dotted around the latter half of the movie, all involving ALF of course. The little jab about the possibility of seeing ALF dolls on sale everywhere was very cute and meta (back in the day, at one point, ALF dolls were everywhere). ALF talking dirty to a blonde female was most amusing. 'do you mind vacuuming my lap? Nina needs a clean place to sit' ha!..ha! (ALF laugh).

The main problem with this movie was the fact it just felt cheap and not well thought out. For starters its a made-for-TV movie (not good) and damn well looks it (also not good). Yes it follows on from a TV series but it doesn't look THAT much better which is not right. Yeah you could say it doesn't need to be flashy but blimey it could of looked better than this. There is nothing really exciting here, nothing to look at. Every scene is boring, set in boring locations, it doesn't appear that any imagination was used anywhere. As said the plot is really pretty wafer thin and makes no real sense. Martin Sheen's character wants to kill ALF simply because his mother was supposedly abducted by aliens and went mad over it? K I can understand him being upset but killing mankind's first contact with friendly intelligent alien life is not the best way forward.

Then you have Miguel Ferrer's character who wants to sell ALF to the highest bidder which is a selfish thing to do but not entirely problematic really. He also said that exposing ALF to the world would make him safer because everyone would know of him and would obviously want to learn from him. Again this actually makes sense. Whilst ALF is a military secret anything could happen to him. Once he's plastered across the world then it would be very difficult for someone to get to him. He would probably instantly become a protected species so to speak. So this plot angle doesn't really work, plus Miguel Ferrer looks really bored here.

So yeah, its fun when ALF is on screen, but not so much when the humans are on screen. Too many humans and not enough ALF was always gonna be a problem (an issue the TV show didn't really have). Maybe they shouldn't have jettisoned the Tanner family? You could of had them try to rescue ALF I guess; still not exactly groundbreaking on the originality front is it. But to write out the main characters of the TV show after 4 seasons on TV? Probably not a good move. Anyhow, this isn't a great movie by any stretch but its not awful. If you like ALF then you'll probably enjoy the ALF nuggets here. But overall this feels so much like a wasted opportunity that is compounded by the fact it probably came too late in the day.

'I thought I'd open with a joke or two. What's the difference between a shower curtain and toilet paper?