•
Directed by: Naoya Kurisu.
•
Starring: Orine Fukushima, Hiroaki Hirata, Kikuko Inoue, Atsuko Tanaka...
Newborn Orine is orphaned in a tragic accident driving home from hospital. Nineteen years later Orine is on the run from the police when government agent Yuri offers an escape: a secretive mission to an experimental space-station orbiting earth. Orine enters the space-station to find her mother, Satomi, almost unchanged since her death almost 20 years ago. Unorthodox scientist Sensei explains Satomi was frozen at death and brought back to life using cyronics. Orine's orders are to shut down the space-station by planting explosives, but Satomi and Sensei attempt to convince her not to. Mother and daughter try to make up for lost time but the beautiful young fugitive must choose to destroy her mother, or save the world. 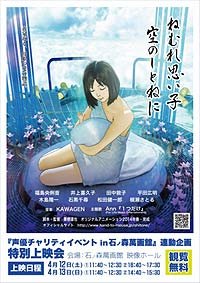 Air force Lieutenant Harris starts for a flight to Boa Boa, on board Reverend Mitchell with a box containing a part of a top-secret extraterrestrial key. They get lost in a supernatural storm and find themselves after an emergency landing in kind of a Bermuda triangle, 5,000 miles off their course. Home again, no one believes Harris' story, and his crew suspiciously denies it too. Harris is thrown in jail, but manages to escape. Together with Mitchell's daughter he seeks the lost part of the key and its secret.