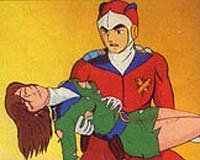 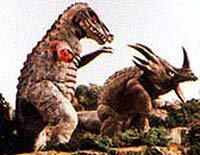 Part of being a semi-professional film critic involves having to watch close to everything I can lay my grubby, Cheetos stained fingers on. Walking into a movie theater, popcorn and Milkduds in- hand, naively waiting for the most recent helping of Uwe Boll to not be that bad, is a grueling torture in the ball park of getting your teeth cleaned. So what does one do to get prepared? What can one do to inoculate against the demons of terrible contemporary films.

Let me tell you right now if Uwe BollMichael BayBrett Ratner are the directors you think of as the cinematic whipping boys of a generation, you clearly need to see worse movies. Take for instance Attack of the Super Monsters, a 1982 direct-to-video steamer that brings new meaning to the word cheap. Set in the tokusatsu tinged world of 1980's Japan, the film pits humans against the fire- breathing, mind controlling dinosaurs who have mushroomed out of the world's crust. The leader of the dinosaurs; Emperor Tyrannos (Reynolds) uses a broad array of tactics to defeat the human armies but always seems to be stopped in the nick-of-time by Jim (Woren), Gem (Levenson) and the rest of the Gemini Force.

Here's the kicker, the film mixes cheap Manga inspired animation, photo real backgrounds and the patented chestnut of guys wearing monsters suits stomping on miniatures. The result is something that almost works in gleefully recapturing the childhood glory days of taking Hot Wheels and action figures and crashing them into one another. The plot further enforces that notion when twins Jim and Gem, in a show of maximum effort, form into a half-human, half- cyborg hermaphrodite called Gemini. The purpose of them combining is to make their flying tank vehicle Izen I into a drilling machine, the subtext of which is enough to make a midnight TV watcher squirt Dr. Pepper through his nostrils.

The film is composed of the first four episodes of the Japanese kids TV show Kyoryu Senso Aizenbogu (197-Present) and boy does it show. Emperor Tyrannos, who seemingly has unlimited psychic abilities, uses the "monster of the week" formula, fighting wars by proxy like a dime- store Repulsa. He uses dogs, then rats, then bats (oh my) to destroy all humans but is always foiled and forced to flee. To complete the Super Sentai clichĂ©s, Attack of the Super Monsters manages to add two lovably doofy sidekicks, the short and chubby Jerry (Perry) and the elderly Eddie (Perry again) who, you guessed it, pilot the Gemini crew's auxiliary vehicle.

I'm not sure what's scarier, the fact that a movie can be made squishing a few episodes of an old TV series together or that there's an audience for this kind of graft. There's certainly a campy appeal to this but that kind of sensibility is only rewarded in a handful of images. Otherwise you're getting the absolute worst the monsters v giant robot sub-genre has to offer; avoid with prejudice.

Review by popcorninhell from the Internet Movie Database.