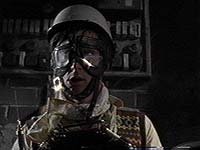 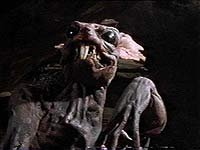 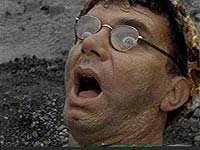 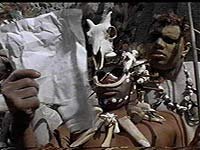 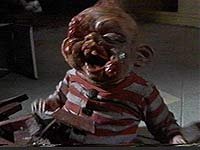 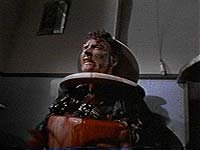 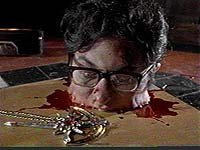 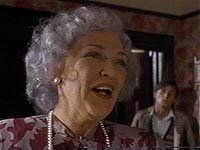 Peter Jackson's problem is very simply that he deals in extremes. He has never found moderation in his career and this is what will always prevent him from becoming a master of his craft. As a shock filmmaker in his early days he was quite effective -' the passionate filmmaker who wasn't that great but kind of grabbed your attention once in a while with projects like "Heavenly Creatures" and "The Frighteners." But today with his multi-million-dollar budgets his passion often blinds him. It's easy to see where this trend started, too: "Braindead" (or "Dead Alive" as it is known in the US) is considered a "horror classic" by Internet gore-flick geeks, and it is often compared to "Evil Dead II" in terms of its balance of humor and the macabre, but the "Evil Dead" series handled these elements far more successfully. Perhaps to the gore-lover "Braindead" will offer exactly what they want: buckets and buckets of blood. To most other viewers I imagine its flaws will hinder any level of serious enjoyment.

Now, I understand it's a comedy (sort of), and I know it's not supposed to be a realistic horror film; but without any sense of a marginally realistic universe this film has no grounding, and its complete lack of character development doesn't help much, either.

Those who just look for gore and wacky humor can perhaps overlook such "trivial" topics such as the clichéd, totally unconvincing (and borderline creepy) romance. Lionel (Timothy Blame) is practically stalked by Paquita Maria Sanchez (Diana Peñalver), and this unnecessary romance continues throughout the film. There's no chemistry, no spark -' nothing. And I can't think of a single sane human being who would continue to pursue a relationship with a man after being treated the way Paquita is in this film by Lionel: the fact that Jackson tries to establish a romance later on in the film, when Paquita is seen yearning for Lionel while on a date with another man, is entirely laughable. If you're going to make a cheesy, gory horror film, then don't try to dump a stupid romance on top. Because the romance in this film is probably the most unconvincing relationship I've ever seen in any film in my entire life. That's hurtful to the film when it spends so much time focusing on this subplot.

Then there's the fact that all these people in Lionel's town continue to die and turn into zombies (and they all end up living in his basement), yet no one wonders where the nurse got to. Or the priest. Or the gang leader. Or why the grave of Lionel's mother has been dug out from the inside.

It's just completely stupid. And just because it's a horror-comedy doesn't mean any of these flaws should be excused. It's incredibly lazy film-making -' the character development (of which there is none of any value) and romance between Lionel and Paquita are insulting throwaways offered by Jackson to fit the mandatory guidelines of horror films. Then there's the fact that Jackson tries to reference the Oedipal complexes of "Psycho" -' but Norman Bates had depth, and Lionel has none. Watching him tend to his mother doesn't ring true or look like something a caring, sheltered son would do -' it looks like something an insane serial killer who wants to have sex with his mom would do. It's another poor call by Jackson in a film that isn't funny enough to be a comedy, isn't scary enough to be a horror, and isn't convincing enough in its character development or subplots to make us care at all.

Lionel is supposed to be our hero, but I've never seen such a dull and unmoving protagonist in any film. Yeah, he's under pressure from his mother -' we get it. But then when his mom dies, he doesn't react at all. It's another example of the total lack of reality in this film in terms of human emotion: at least Bruce Campbell had a breakdown in "Evil Dead" after his girl died. You got the feeling that he was real despite the absurdity of the flick. Lionel is just a big, bland waste of space.

Sure, Blame is talented when it comes to the physical comedy, but his acting is nonexistent: he's worse than the people on commercials for Wheaties cereal. Where did Jackson find this guy, in a New Zealand bar on karaoke night or something? "There, that drunk oaf singing 'Unchained Melody' in the wrong key -' I want HIM for my movie!"

He couldn't have found a less talented individual. And even his physical comedy isn't all that great -' the whole Chaplin routine is kind of funny at first, but after the millionth exaggerated fight with a zombie it gets really old. Plus, the bizarre scene with Lionel nursing a mutated demon baby in a park and then proceeding to punt, kick, beat and throw the thing after it attacks him is like watching a train wreck: so much potential for this scene, and all it results in is a lame, childish sequence of frat-boy humor that brings to mind the atrocity committed by Tom Green in "Freddy Got Fingered.

Review by MovieAddict2016 from the Internet Movie Database.