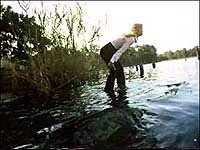 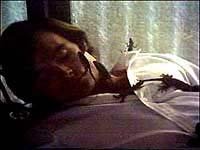 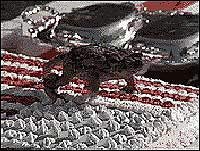 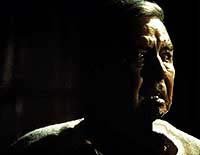 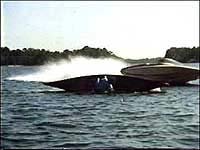 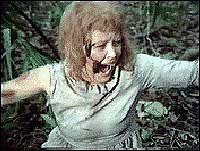 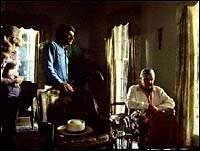 This movie is so incredibly stupid and poorly made it kind of becomes likable. The idea is that the big mean millionaire who, like all big mean millionaires, doesn't care about the environment, has dumped a bunch of poison into the surrounding swamps in order to quiet the incessant noise of the frogs. This may or may not have made the frogs and amphibian mutate, or it may not have, and the movie is so shoddily made that you can't tell, but one thing is clear: they want to kill, Kill, KILL!!

The movie begins when some Eco-dork is out photographing pollution along some lake. Your first clue as to where this movie is headed is that the pollution he photographs is obviously on a different lake than the one he's on. Now, I was looking forward to a nice hot slice of Sam sandwich, and in the opening minutes I'm sitting around saying "Okay fine, but where's Sam? I wants me some Sam!" before I realized that the photo-snapping canoe-paddling Eco-dork I was watching IS Sam. Just without a mustache. And Sam Elliott without a mustache is like, what? Mount Rushmore without the giant heads?

So anyway, Sam is run over by a partying playboy and his moll in a speedboat, (actually, Sam obviously flips his own canoe a second before the wave hits him), and they feel so "bad" that they insist that he come to their lakeside mansion, where their blow hard wheelchair-bound grandfather is preparing to celebrate his birthday on the following day, July 4th. The blow hard grandfather is played by Ray Milland, known primarily as the poor man's John Houseman, and he does his incorrigible Houseman imitation throughout. Sam is then introduced to every single member of the family, including one of the playboy sons who has brought an African-American "model" with enormous hair along with him. The entire family is a stereotype of a millionaire family, but unfortunately the screenwriter can't think of anything for them to do but sit around stuffily, drink, play tennis, and complain. This becomes more and more comic as the grandfather insists (even in the face of the impending amphibian apocalypse!) that everyone stay at the house to celebrate his birthday... which apparently consists entirely of sitting around, drinking and complaining exactly like they do on any other day.

Now, whenever you mention this movie to anyone, they say "Frogs?! What do they do, GUM you to death?" And that would identify the central problem with this movie's premise: frogs, on the whole, do two things: a) sit, and b) hop. Neither of which is very threatening. The movie simply hopes you won't notice this, however, and takes the tack of intercutting shots of frogs sitting andor hopping with the characters going about their business, hoping to create some kind of eerie frisson. Often they will show a character walking by, then pan down to see that: there are frogs nearby! This effect will horrify you to a slightly lesser degree than picking your toenails. There is a humorous effect to be had when you realize that since frogs do not hop on cue, having a guy offcreen chuck a frog at a sitting frog WILL in fact make it hop. That's a cinematic solution.

But it's not just the frogs that are plotting evil as they sit silently doing absolutely nothing. The snakes, the lizards, the slugs, and the crocodiles-'-basically anything creepy-'-are all in on the nefarious plan for swampal dominion. Again, most of these things, you'll note, are not known for their successful attacks on humans. So they resort to other methods. The first "attack," which happens 45 minutes into the 90-minute movie (please ensure that your fast-forward button is working prior to loading the film), occurs when the one of the morons shoots himself in the leg with a shotgun. Unfortunately this occurs under a willow tree teeming with tarantulas. The makers of this film sincerely hope that you cannot tell the difference between a spiderweb and common tree moss, because I think you're supposed to believe that the spiders are covering him with their wicked webs. Now, since tarantulas do not attack humans, this necessitates some guy off camera chucking spiders at the poor victim while he writhes around and flails at nothing. It's truly straight out of Ed Wood.

I would have liked to have been the "creature chucker" on this film.

Later, some of those ingenious lizards use poison in order to kill their victim, and then they... go lay on him. The horror! There's also slug and snake attacks. After a while the deaths come thick and fast and one more nonsensical than the next. Oh, and please take note of the first corpse found: first, he's laying there obviously breathing. Then Sam turns him over, and his face is all gross, eyes sealed shut. Cut to a shot of Sam mourning this loss to the family of man, then cut back to the corpse, whose eyes have suddenly sprung open. You just never do know what's going to happen in that swamp.

--- Hey, check out Cinema de Merde, my website devoted to bad and cheesy movies. You can get the url from my email address above...

Review by iago-6 from the Internet Movie Database.