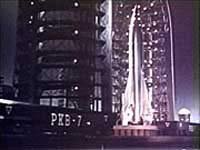 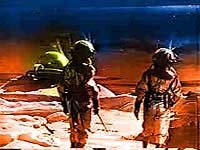 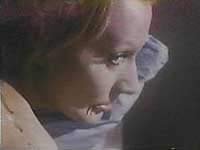 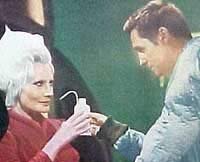 It's 1990 and earth has finally made its first contact with extraterrestrials on Mars. Which they have told earth through radio waves that they actually plan to visit earth. Although something goes wrong in their attempt and an expedition is sent to Mars to find any survivors. In which case they discover a green skinned lady. On their trip back the crew encounter that their new passenger has a deadly fixation for blood.

"Planet of Blood" is a cheap little hybrid picture by director writer Curtis Harrington. He turns in one very solid Sci-fi horror yarn which is held together by capable performances from John Saxon and Dennis Hopper and some strikingly eerie visuals that go a long way in plastering the film with an atmospherically moody embrace. The haunting story is quite languid, but keeps things rather firm and planted throughout the material are a few surprises and neat touches. The astute plot is quite original and has a variation that would go on to influence (with such others like "It! The Terror From Beyond Space" and Bava's "Planet of the Vampires") the masterpiece "Alien". Some might find the pacing quite slow going and a jargon packed script terribly chatty, but I found it more often interesting with the questions that are raised than boring. If action and mayhem is what you want, it doesn't really kick into gear until the final 30 minutes, where it ends on a surprising final note.

The production looks quite colourful with suited special effects (from a Russian sci-fi flick) that simply does the job. Visually, there are some wondrous lighting compositions and cardboard sets sprayed with a vibrant colour scheme. An otherworldly music score builds up some rustling tunes that rattle along. Harrington's direction is commendably focused and stylishly tailored. Performances are good with the likes of Basil Rathbone, Judi Merdith and Florence Marley as the mysteriously hypnotic and silent alien woman. Watch out for her "Look into my eyes" sequences. John Saxon chimes in with his usual impressive performance and a young Dennis Hopper is sound. Also Forrest J. Ackerman makes a minor mark in the last minute of the flick.

For it's budget, it's a well-presented and exceedingly slow burn premise with a sterling cast.

Review by lost-in-limbo from the Internet Movie Database.