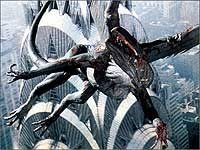 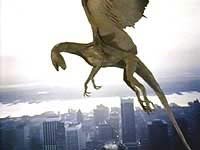 Let me dash your expectations right from the start: Q the Winged Serpent is not the story of 007's lovable gadget-master muting himself into a flying monster and attacking Noo Yawk. I know. I was crestfallen too.

But, what we do get is nearly as perplexing. Befitting all expectations, Q is exactly the kind of trashy pulp escapism stalwarts of the Ray Harryhausen house of stop motion behemoths will lap up. Against all expectations it's actually fairly good. And not just 'bad good', even. Within the gloriously daft monster mash framework, schlock sultan Larry Cohen is subversive enough to deliver a surprisingly watchable, clever, and thoroughly contemporary police procedural. Q is silly yet sly enough to continually pull the rug out from viewers, with a self-aware wink that's so weirdly fascinating you almost forget to set internal timers for the next batch of heads or feet to fall from the sky.

There's a constantly shifting sense of who's in on what joke throughout Q, and it helps keep the film a vibrantly enjoyable watch. Initially, Cohen seems more interested in crafting his murder mystery, and there's a sly sarcasm to his treatment of the monster movie ensconcing it. Rather than the slow tension building of his 50s source texts, Cohen takes a leaf out of Jaws' handbook, starting with a splashy monster massacre, then conjuring each subsequent screeching bloodbath with the same fastidious clockwork of the rotating rooftop sunbathers that become his creature's prey. Cohen's Quetzalcoatl attacks are so precisely timed, brazenly foregrounded, and cheerily gruesome, you almost expect him to accompany them with silent film style intertitles trumpeting "You want carnage? Well here you go!!"

Meanwhile, Cohen's nearly laughably disconnected 'real movie' cop drama zings along, with impressively naturalistic dialogue sold well by an improv-heavy cast who help keep the film snappy. But, when given the elbow room to expand his cop drama, Cohen's plot is so purposefully vacuous it's at odds with its relatively sophisticated telling. Think Jaws birthed by unlikely parents The Taking of Pelham 123 and Them!, and you've got a fairly good sense of Cohen's duelling art-house and outhouse sensibilities, and ensuing plucky, sardonic humour.

Take the Aztec ritual sacrifice subplot fuelling the creature attacks: intriguing, but given so little attention it's transparently an afterthought. Take the cheeky graphic matches throughout, consistently teasing the Quetzalcoatl's arrival, only to subvert expectations, only to pull the same gag, again, within a matter of minutes, and have it work, again, goddamit. Take the classically spooky score and bobbing panoramic aerial shots of the city, landing somewhere between silly 50's foreboding and goofy Tommy acid trip. Even the Quetzalcoatl's stop motion attains this blend of impressive and cheekily low-fi (its movements look deceptively convincing from afar, yet its close-ups are delightfully cheesy), which only adds to the campy fun. It's hard to tell who Cohen's having on throughout: audiences expecting pure, unfiltered trash, or daring to dream of sophisticated, nuanced storytelling therein? A studio expecting a taut, low-budget cult moneymaker? Himself, for hesitating to fully commit to one or the other? It's hard to say, but the result is surprisingly jubilant and addictively watchable throughout.

If anyone's in on the joke, it's Cohen's cast, who are just too damn good to even acknowledge their B-movie slumming here. Michael Moriarty delivers a performance so full of playfully controlled lunacy he reaches Christopher Walken levels of unhinged but strangely effective. His righteously indignant, nebbish loser hood should be thoroughly dislikable throughout, but Moriarty is taut yet unstrung enough throughout that he's oddly compelling - never more than when bellowing instructions on how to devour his heist buddies to the Quetzalcoatl with a flat affect that has to be heard to be believed. B-king and Bill himself David Carradine glides through the film with a breezy charisma, likable enough that it's easy to imagine an entire monsterdetective franchise being hung on his shoulders. With this in mind, it's sad to see Shaft himself, Richard Roundtree, so painfully underutilized. He's fantastic his few moments to shine - namely, tossing one-liner metaphors left right and centre while roughing up Moriarty's lout - but inexcusably benched at the back of the shot to an almost aggravating extent. Candy Clark delivers consistently solid work as Moriarty's hard-edged but unfeasibly patient girlfriend, while Malachy McCourt is deviously charismatic in the 'Jaws mayor' role, micromanaging mass panic.

You want a sense of how delightfully confused Q the Winged Serpent's reception was? As Roger Ebert recounts, it was premiered not at a midnight B-horror circuit, but Cannes(!). There, critics could pontificate on hidden meanings and tonal subversiveness, amidst, as critic Rex Reed effused, "all that drek." Producer Samuel Z. Arkoff's response? "The drek was my idea." If Quetzalcoatl is the deity of wind and learning, appropriated here as Z-grade killing machine, Larry Cohen is its high priest troll. And the trashily sophisticated mischief they make is rather delightful indeed.

Review by pyrocitor from the Internet Movie Database.