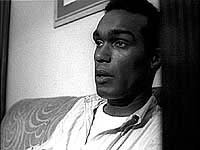 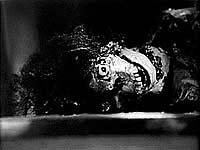 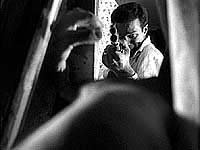 In 1968 America found it's self-mired in the grip of social, political, and racial upheaval. The Vietnam War was exploding and the body count was broadcast every night into the dubious comforts of our households. Generations were clashing, seeing each other as the enemy. Battle lines were being drawn over the color of a person's skin, or the length of their hair. Heavy stuff huh? And your probably saying, "BT! What does this have to do with the movie?" well, you'll see as you read on. During these times, B movies rain supreme. Turning out of Hollywood faster than Japan can turn out Pokemon cards. One of those B movies in small, black and white venture from John Russo, and George Romero, would go on to become one of the most influential, and important horror films of all time. It would become legendary, as a film that not only started an entire sub-genre, but also accurately and without apology, mirrored all the strife that those times had to offer. That film was Night of the Living Dead.

The movies plot is simple enough, a young woman named Barbara played by Judith O'Dea, and her brother, Johnnie played by Bill Moseley, visit their fathers grave at a cemetery in the rural backwoods Pennsylvania. The first hint of socio political commentary this film has to offer takes place in the first few minutes. As Barbara's brother mocks her beautiful prayer, scoffing at the notion of "Church of God". For 1968 this was pretty risqué stuff. Within minutes they are attacked by a zombie, which kills her brother. Soon several zombies, eager to consume her warm tasty flesh, pursue Barbara. She takes shelter in an old farmhouse and soon finds our heroine has company. The films hero Ben, played by Duane Jones, arrives on the scene also seeking refuge in the farmhouse. Ben was unlike anything ever seen in Hollywood at that point. He was African American, and standard convention advised against having an African American as your main hero. To compound things he wasn't a suburban African American. Nope, this brother was from the streets and he let the viewers know it.

In their first twenty minutes with each other, Barbara is more scared of Ben then she is of the ghoulish army in camp outside the house. Again, Romero perfectly reflected the racial turmoil of the time. Soon five other refugees from the nightmare, including Harry Cooper, played by Karl Hardman, join them who typifies the average white, middle age, and xenophobic businessman of the era. His daughter Karen, played by Kyra Schon, and his wife Helen, played by Marilyn Eastman, who's beginning for the first time in her life to question her husband's judgments and motives. Again the movie speaks of deeper issues, touching on woman's liberation and the classic of all these problems, old money values.

Later in the movie we deal with the issue of patricide. When the Cooper's daughter, Karen, who previously had been bitten by a zombie before they got to the farmhouse, dies. And then comes back as one of the walking dead, and kills, and eats, her mother and father. After barricading themselves in the house, cabin fever soon begins to pick up the groove, inflicting more damage than even the zombies can do, culminating in a desperate struggle against not only the cannibalistic hordes outside, but against each other as well.

Perhaps the most memorable moment in Night of the Living Dead is the ending. Romero provides a conclusion, so shocking and so unexpected, that the critics of the era were unsure what to make of it. Audience reaction at the time was one of strong disbelief. Another interesting aspect of Romero's zombie methods is that no explanation of the dead rising and eating the living is ever given. In this film it is speculated that a recent space probe returned from Venus may have caused the change due to background radiation. It's important to remember that at the time, America was in the grip of a nuclear war fever, and the danger of radiation was on every bodies mind.

Budgetary restraints and a lack of experience may have added some rough edges to Night but they don't really diminish the film; they actually add to its surreal atmosphere. For instance, the camera work is stationary, never changing position. Each shot is from the same, locked vantage point. Most of the shots are very tightly framed and from low and skewed angles. Sometimes you can see the ceiling. Sometimes the camera is unsteady and shaky. It all helps create the claustrophobia and unsteadiness that's so integral to the film's power and message. The walls are closing in; the wall of zombies outside, and the wall of mistrust and fear inside.

The other rough edge I'll mention, if you can even call it that, is the acting. It ranges from quite good to "I'm glad she didn't have more lines." Again, this only makes the proceedings of the film more odd and maybe a little more unsettling. If you can suspend your disbelief for the dead rising chances are some stilted acting won't bother you.

Night of the Living Dead truly deserves the praise and acclaim that has been showered upon it in the last few decades. There have been many sequels and remakes of the movie, and most of them are good. However, the 1990 remake, which was done in color, I considered to be an abomination. Sorry Tom Savini. If ever a horror movie were a masterpiece, this one is it. An important milestone in cinematic history, and proof of what independent filmmakers can do. Night of the Living Dead is the seminal zombie movie.

Review by flhamm808 from the Internet Movie Database.