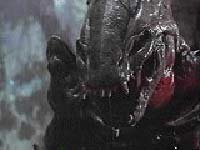 Like I said in the summary, "DNA" was one of my first cheesy experiences. And still, today, I watch this movie again and again, and I'm still laughing out loud. I have a particular affection (not in the usual meaning of the word) for this stupid, lame, pointless, laughable movie. It's the one that introduced me to a world I just can't leave; the world of bad movies. I have acquired a huge interest in this kind of cinema.

But that's beside the point. I have to say that, in every way, DNA is, for sure, one of the worst movies out there. This movie is SO unoriginal, it's awful. It's just a whole collection of cliches taken from other popular movies, such as Predator, Jurassic Park, Indiana Jones, and Alien.

First, I'll have to say that the acting is really bad. Especially the boy that's playing Matzu. The only satisfying point that the film could bring to me was that stupid, sissy boy's death. (Spoilers) Actually, I had the very nice surprise of seeing him get killed by the monster. That was kind of weird to see that because normally, in movies, the little boy rarely dies. But, let me tell you that it was the only good point of this cheese pie. The rest of the cast is not a lot better. Mark Dacascos (who played in "masterpieces" such as "The Base", "Sanctuary" and other stupid action movies) completely changes his acting path...in DNA, he plays a doctor! Yes, a doctor! It's strange, because in his previous and other films, he always has a violence-related character. Now the question is: how the heck could the director make a DOCTOR aggressive like Mark's character? Yeah, I mean, the first thing you know is that after 20 minutes of runtime Mark must have been tired of such a non-violent role and suddenly, this doctor takes off his smock, letting us see his muscled body and his warrior-like tattoos, and threatens the monster with a hatchet...very convincing doctor, Mark. You should try a scalpel! No, seriously, he's bad. And there's Jurgen Prochnow, which plays the bad guy, also a scientist, that discovers a mysterious formula...so mysterious that we don't even understand it when he simply adds two lines of chalk on a blackboard full of meaningless symbols that are supposed to make a mathematic solution to something that would explain where a certain creature comes from, a creature that would be some kind of deviated dinosaur...it's not clearly explained. But, the funny fact is that, 50 minutes later, you learn that the creature is not a dinosaur, it's an extra-terrestrial. Now, if that's not a complete illogic plot turn, then I'm a plastic cyber ninja...which I am not. There's also Robin McKee, a very bad actress that should definitely change her profession.

The funniest point in "DNA" is, I think, its special effects. The helicopter crash is simply a classic! It's the most ridiculous thing I've ever seen, I think. Special effects in "Godzilla" are better than that. You have to see it to believe it, really! There's also some very bad action coordination. Mark stabs an aboriginal in the back while he's running with a machete...you should see the scene, it's laughable. The aboriginal starts falling on the ground before Mark stabs him. And the sound effects are just sometimes absent. The monster is a pure (and poor) copy of a creature from the "Alien" movies. The costume looks like a Matel action figure. Sometimes it is made by CGI, and it's even worse, especially when the monster cloaks...it was rendered better in 1987's "Predator". And let's not forget that the cloaking ability of the monster is a pure rip off of the predator, and not the only one. The movie sets in the jungle, there's one part where Mark makes traps in the jungle to kill the creature. There's a part where Mark gets out of the water and covers himself with mud to avoid being seen by the monster. If that's not pure rip off, then what is it? Certainly not originality. The part where the bad guys try to catch the monster in an electrified fence using a goat to lure the beast...doesn't that remind you of a scene with a T-Rex and a cow in "Jurassic Park"?

There are many other parts that make absolutely no sense, like when Mark dives down a cliff (another "Predator" rip off!) in the water, leaving his bazooka on top of the cliff, but taking it back when he's in the water...where was that gun? Anyways, all those reasons make of "DNA" an essential movie for any cheese fan. It really is the perfect stupid and bad movie, it's an awful piece of cinema. Cheap action, really, really laughable special effects, bad acting, some stupid one-liners, a funny and nonsense wannabe scientific content, and so many comparisons with other movies that this one ripped off. Funny stuff, very cheesy, ideal for a cheese fest night with friends.

Review by ~PL~ from the Internet Movie Database.