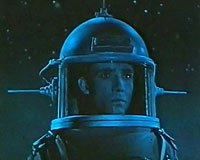 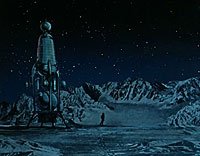 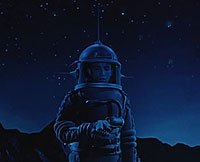 It begins with cosmonaut Rudolf Jellinek landing on the moon. He follows footprints which lead him to the gentlemen of Jules Verne's expedition. They introduce him to their seniors on the site: Cyrano de Bergerac and the Baron Munchausen. Munchausen takes the Moon Man (for so he must be) on a trip to the Earth in what appears to be the 18th century. There they rescue the fair princess Jana Brejchová from the Sultan of Turkey and go on a series of imaginative adventures.

It must have been a dangerous movie to produce in Czechoslovakia in 1962. It celebrates imagination. It's not even imagination in the service of anything except itself. It's the imagination of a boy, just looking up from his loved library of Jules Verne and Alexandre Dumas and noticing girls for the first time. The set designs reinforce this. They look like Dore steel engravings, and the stock is toned, occasionally for what seems to be early two-strip Technicolor, with flashes of bright colors. Munchausen fights ten thousand bashi-bazouks; he flies about on cannonballs and dwells in a whale for months. He does whatever he pleases, as the fancy strikes him, and Jellinek follows along. Will he ever develop an imagination of his own?

It's clear to me that Terry Gilliam mined this movie extensive for his own MUNCHAUSEN; there are too many settings and incidents for it to be otherwise. He would have been 24 when it premiered in the US at Pacificon. I have no doubt that he saw it there and it left an impression in his mind at least as great as in my own.

Review by boblipton from the Internet Movie Database.