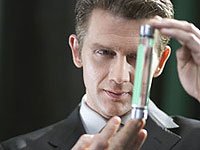 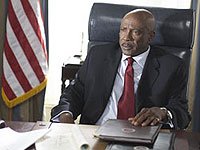 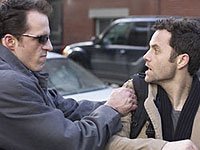 There have been three Left Behind films based on the first two books, and I have to admit that the films are a great deal better. Many events are changed, but the changes are for the better. Whereas the book is kind of a rolling, mindless narrative that seems to randomly change and has no real structure except the author's random whims, the films have a plot and quite a bit of substance. They've taken the creative characters that Jenkins somehow concocted and made them people much more real than the 2D stereotypes they previously were.

The third film, "Word at War", which is based on the last 50 pages of the second book, was much better. In terms of style and narrative - well, Cloud Ten hit it right on this time. There was very little that reeked of "Christian film" here, and that's a good thing. The narrative and style are refined and consistent. The acting is all much better. In particular, series regulars Brad Johnson and Janaya Stephens both turn in great performances. Kirk Cameron is still Kirk Cameron, which doesn't work too much in his favor. His real-life wife, Chelsea Field, has always sounded like she's reading lines instead of becoming the character, and it's really noticeable here. There's a scene where she's trying to seduce Rayford and it just drags on endlessly. Probably the only real cringe-worthy moment of the film. The newly recast Bruce Barnes, played by Arnold Pinnock, did a decent job. Unfortunately, his unfamiliar face at this very crucial moment in Bruce's life really detracts from what should be a very, very pivotal moment in the film. Given the choice I would have preferred Clarence Gilyard, who payed Bruce in the first two films.

I was extremely impressed with Laura Catalano, who played Rayford's second wife, Amanda. I was annoyed that her introduction was shorted so greatly - Rayford goes from weeping over his first wife in the previous film to getting married again in the opening moments of this one. Nevertheless, I thoroughly enjoyed Amanda - Laura Catalano brought her to life in a way Jenkins couldn't begin to figure out. Her character was a highlight of the film despite her short amount of screen time.

The story was put together pretty well. It focused more on President Gerald Fitzhugh (played by the fantastic Lou Gossett Jr.) than on our band in the Tribulation Force. This really annoys some people, but it's an approach I can understand. The events of the last fifty pages of Tribulation Force had no cohesion whatsoever and, frankly, are so earth-shattering that they deserve their own story. And while many people dislike the focus on President Fitzhugh, I found it quite interesting to get inside the mind of one of the most overlooked characters in the series. Lou Gossett portrays this guy as someone who even I would vote for - noble, distinguished, but not afraid to draw his own gun and kick some ass when necessary. His gutsy move at the end - though contrived - worked well for the story and provided a bit of redemption for the character that he lacks in the books. This is one instance where deviation from the books allowed the film makers to craft a MUCH better story.

The story finds a biological agent poisoning the Christians of America, who are proclaiming Nicholae the Antichrist of the book of Revelations. It's definitely an interesting, if somewhat sci-fi style, notion that wasn't included in the book. It brings some dignity to the death of Pastor Bruce Barnes, which is the first of many losses the Tribulation Force will suffer before the end of history. But the cure for this agent is so patently absurd, I find it hard to believe it was actually used. While this is happening, we follow Fitzhugh's exploits as he learns his friend Carpathia isn't all he appears to be.

There has been some debate on the validity of Nicholae's powers as seen in this film. They're a bit more "Charmed" in nature, with Carpathia levitating the president and smiling when Fitzhugh tries to shoot him and the bullets kill the guy standing behind him. Though the books are never so blatant, this kind of thing isn't unprecedented. Either way it didn't bother me, since I view this particular theological mindset with a pound of salt anyway. I don't buy into the complaints of Carpathia's duplicity - seeing him as more monster than man is part of the progression of the books so it's fitting that we see less of his public face and more of his "evil" face here. Eventually all we'll ever see is "monster".

I was glad to see some things being set up for later - Hattie's pregnancy, for example, and the seeds of her own salvation. The ending of the film gives me continued hope for a fourth film. But if they try to recast anyone else - especially any of the remaining 3 original Trib Force members - the series may lose some serious meaning.

By the end of the film, we arrive at a very similar position to where we are by the end of the second book: a world at war, a dead president, a pastor-less Trib Force, and with much of the world we knew gone. I would expect the next film to focus a bit more on the Trib Force and continue to progress the overall story. I hope that the improvement in quality continues and especially that they're able to do justice to what is about to become a vast array of characters. The books introduce a crap load of Trib Force members in the coming volumes and doing justice to them all in a 2 hour film will be tough. Hopefully the brothers Lalonde will continue what they've begun.

Review by Grimm Sleeper from the Internet Movie Database.