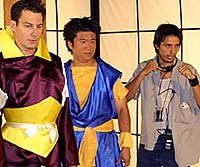 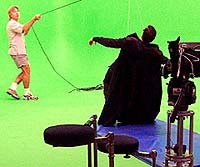 The Helix Loaded is a low budget spoof of The Matrix trilogy, Minority Report, The Incredible Hulk, Fight Club and many more. As a low budget feature shot on miniDV it is certainly rough around the edges, though that adds to the charm. What elevates this film above the drek of low-budget indies are some surprisingly good special effects (impressive bullet-time, wire-fu effects) as well as its irreverent sense of psychedelic humor. This one has the potential to be a cult classic.

Who could not be charmed by a guy in a bunny suit, an enlightenment drug in the shape of a gummy bear and VANILLA ICE kicking ass?!? :-) And Scotty Levy's 'The Other One' is a dead-on take on Keannu Reeves.

Review by meltedbrain from the Internet Movie Database.