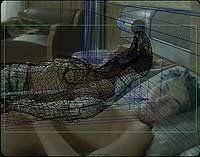 I think the title relates to the inner transformation occurring inside the character of Jill. She comes from an unknown place, the immortality of space/time, and she arrives on earth to experience life (vitam) on this planet, which is the experience of mortality. The title could have been "immortality to mortality" but it sounds just a lot, lot nicer to have some latin words in a title. It's original. The film depicts the fantastic transformation the character of Jill goes through. It is the construction of womanhood in two processes. It is first a physiological transformation. We find out she was born 3 months ago; she's in mutation and at the end of the movie the construction of her woman body is completed. It is a psychological transformation through the process of (making) love. It is the story of the encounter with Nicopole.

We find out about Nicopole that he used to be the soul leader of a contestation mouvement for the defense of the human kind. In those future times where the action takes place, the transplant of synthetic or cloned organs has become a common practise and it is the sole monopoly of a multi-powered company Eugenics, more powerful than the government. Biotechnological advance creates new species of half humans, half clones. New york has been stratified into layers and the half-humans have found refuge in the lowest layers, despised by the humans. Nicopole was sent to prison for opposing Eugenics. He was condemned to be cryogenized for 30 years. When the movie starts, 29 years have elapsed. His cell detaches by accident from the floating prison. His leg is cut off in the fall and he eventually meets the God Horus who decides to save him and to use him for the completion of his manipulative purposes.

This is the summary of the storyline. I think we had some very good materials to make a movie. The couples were very interesting: Jill/Nicopole and Eugenics/government. The script scenario was very poor for the way it treated the institutional couple Eugenics/government. the government is portrayed by the senator which has been turned into a grotesque and somewhat caricatural character...Not convincing. Anyway, the script was meant to be all centered on the couple Jill/Nicopole and I think it was totally sucessfull. I loved to watch their relationship evolve until the last scene. For their first encounter, they are in a cruising bar (a used-to -be familiar type of place to me). The character Thomas Kretschmann/Nicopole approaches Jill (whom he had immediately noticed of course). He starts to speak to her and he offers her a drink (and I said to myself "ok, this guy knows how to deal with girls". That's my type of guy. I like capable people). And Linda hardy/Jill replies to him after using her telepath skills :"for what you have on mind (and she pauses a little because being only 3 months old, she doesn't understand much to sexual images) , it is no". And I said to myself:" ok, this girl knows how to reply to a guy. I like her". And then I was totally into the film.

I liked the choice of actor Thomas Kretshmann as Nicopole. He has a slender figure/body ( "une silhouette fine" in French). So this gives an young image/impression (and this is important to attract a young middle-age audience in their 20s, 30s. Because you like to identify to young, well-proportioned images). And at the same, thomas Kretshmann has the face of someone who is 35-37. So it is the image of maturity in a young and well-built bodyline. and in the different dialogues with Jill, actor thomas K. gave an intonation of voice that expressed a mixture of sweetness/toughness in contrast with the cold, contained voice of Horus in the severity of a rape situation. The tone of voice, the sense of guilt, the feelings undramatise the situation (and let the eroticism to fill the atmosphere).They generate a sentiment of sympathy for the character of Thomas K/Nicopole in the audience.It is what I sensed in the audience with whom I was. You like that guy.

and I liked the choice of Linda hardy. I liked the velvet white skin in contrast with the blue nails and the blue tears. I like the hair you can detach like saurian/lezard skin, that gives the idea of the mutation in-process. I think Linda Hardy gave the beauty, eroticism and the fragility to the character of Jill who go through the stages of birth, womanhood, love, motherhood in an incredibly short period of time.

The love/sexe story was beautiful. In one of the previous comments posted on this site, someone called this film a breeze of fresh air. It is. And you watch this movie mainly for the love/romance interest. The movie might not work so well at the theater but it should do very well in video stores. The cgi images definitely attract too. A lot of money was put in the realization of the gods, the views of the pyramid and new york; and the look and feel of it was just perfect, beautiful. The cgi characters of the policemen, detective, senator were sacrificed. That technical aspect can be forgiven due to budget/time restriction. But the script scenario for the senator is not forgiven (it is difficult to forgive a weakness in whatever script). to carry on with script, at some point, you see the gods play monopoly. The effect is desastrous. The gods are supposed to be almighty. You can show them monitoring for example 100 screens on all the strategic locations on the earth, screens on economic data (Eugenics is supposed to be the huge, huge company; New York is the financial market capital).

At the beginning of the movie, I felt uncomfortable with the aesthetics used by Enky Bilal. The graphics in the cartoon are much better than in the film: I had a problem with the face of Jean-louis Trintignant. It is ugly to watch. it seems he has come out of the surgery block.he looks like frankestein. I didn't come to watch this type of movie. I am ok with cyborg face. But it has to be absolutely neat. The first dialogue with Charlotte Rampling and Jean-Louis Trintignant was fundamental because through that conversation, you are supposed to feel the all mighty power of Eugenics. You need a scientific lecture at this point of the film or you kill your movie. The scientific background was totally absent so you don't take Eugenics seriously and the movie falls apart.

Moreover I found the set Bilal created for Sub-New York, alienating. The purpose was to create a dark and gloomy atmosphere. Maybe it was a bit too gloomy (the brooklin bridge has been turned into a wasteland. There's really a feeling of uneasiness). There's a landing and take off area in the skyscraper of Eugenics headquarters. It looked more like a hangard to me (so far as I remember). We expect to be impressed by an advanced technology. They did a great job for the look and feel of the pyramid and its inside. You just wish they been able to give the same quality to the rest of the graphics. This suppresses the feeling of alienation.

The first 20 min were really difficult. And I think that the rest of the audience was feeling uncomfortable in the same way. The portrait of New York we are given is just a very regressive picture you will not step in. When I saw the first image of Thomas K/Nicopole, I just said to myself: `again, who's that loser'. He starts to splutter some poetry lines. It is so little articulate you can't guess what he is saying. I was about to say good point for the poetry. I tend to like to listen to and memorise poetry lines but it was impossible. You can't hear. so I was pissed off. But then comes the encounter with Horus. The plot starts to unwrap. And then the encounter with Jill.and All's back on track.

There were other flaws (script flaws---avoid the word `fuck you', `fuck off' is more relevant and it means `Dégage, Horus', which is exactly what Nicopole precisely meant) in the rest of the movie, but I was forgiving. In the last scene, there's an ending with poetry lines (that you can't here so well.Poetry is meant to be listened to and not just to be ornementation). But at that point I was totally forgiving .

All in all, this movie will stay as a movie I really enjoyed. It is a very good romance story. The characters have strong personalities. You have a sense of liking to the actors. The audience with whom I was liked it a lot too. You see that on the faces of people at the exit of the theatre. There's breeze of fresh air/oxygen that fills you up. So I was very surprised to see a lot of average ratings for that movie. If it doesn't meet its audience at the theatre, this movie will find its audience in video stores, definitely.

Review by michaelComment from the Internet Movie Database.