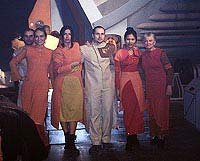 Recap: A military outpost from earth are attacked without warning by a mysterious and previously unknown enemy. The humans weapons are totally ineffective against this enemy and they must flee. Fortunately a disrespected scientist appears at the last moment picking up the refugees. During their flight they head out to a set of mysterious coordinates that might hold some answers to the attack. Suddenly they experience a jump and end up on an ice planet, way beyond all of known space.

Comments: A bold attempt to make a space opera sci-fi movie, but it fails completely. The effects are not at all up to the task, but not everyone can have a big budget and the effects don't really annoy me. Not when the story is a complete mess and can only be regarded as an embarrassing failure. And with the script and story you can't blame on a little budget, a good story is a good story however the amount of money you put into it. And by the same token, no amount of money can save a poor story.

The story is a incoherent mess. The best description I could give is that it feels like someone has mixed up the pieces of at least five different jigsaw puzzles and then pulls pieces by random. Different scenes after each other more often than not doesn't really connect to each other, it seems like something totally unexplainable or unmotivated seems to happen in some vain attempt to connect them. And in some cases they director simply seem to give up and fades to black, completely resets the story and starts on another thread.

There are numerous different substories, none of which are really resolved. And it is no small questions that each story puts forth, it is aliens, it is the attack, who is the enemy and why did they attack, it is aliens that appear to be able to shift between energy and matter and possess humans, and why do a mysterious treecomputer know ancient Sumerian? Not even the cast seem to be convinced or even aware of what they are acting, in some ways I feel for them. When the writer's poor imagination seem to fizzle some characters just stand around and scream, totally pointlessly. But I'm not even sure that is what annoys me most. It might be the snowboarding, equally lost, American natives that appears on the distant planet mid through the movie, and then just as quickly disappears again. It might be the Han Solo-rip off that completely fails or the energy-being (or whatever it is) that appears like the mother of all Deus Ex Machinas and defeats the enemy by screaming at them. Or it might be that after suffering through the incoherent mess it doesn't even end properly, just with a quote that so begun the Ice Planet Archives.

What I try to say is that this was a miserable attempt of making a sci-fi movie. The effects and props where not bad, actually quite decent, but the story is just a little more comprehensive than a mad man's ramblings.

Review by Enchorde from the Internet Movie Database.