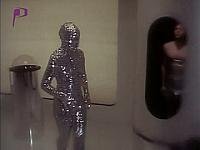 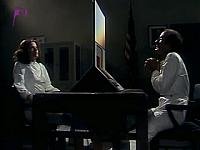 This is a low-budget sci-fi flick concerning an alien race snatching a small number of human beings out of their everyday existence in order to study their behaviour.

There are six humans in all, and although the characters interact quite well, they are rather clichéd stereotypes comprising the handsome hunk (Martin Kove, probably the most familiar face among this small cast), the shy, pretty blonde girl who falls for him, the technical expert who becomes the unofficial thinkerleader of the group, the spoilt wealthy woman more concerned with her own welfare than that of her companions and the older religious man who is convinced that all their problems can be solved by placing their faith in God. There is also a Southeast Asian woman (a token ethnic minority character?) who is killed off in somewhat bizarre circumstances very early on, presumably to heighten the tension and convince the viewer that the lives of the remaining quintet really are on the line.

After an initial sequence in which the various parties are each abducted from their home environment by means of a fireball-like phenomenon descending on them from the sky, most of the action takes place in the eponymous 'laboratory', which oddly resembles the interior of a rather squalid, abandoned government office building. Although this obviously saved on the budget, within the context of the film it is not made clear whether the aliens were recreating a familiar environment for their captives or had, in fact, merely transported them to a convenient place elsewhere on Earth. Occasional exterior shots of the facility would tend to favour the latter theory.

Perhaps it is explained at some point, unfortunately the aliens' speech, a synthesised effect not dissimilar to that of the Cylon voices in Battlestar Galactica, is difficult to follow, particularly since the overall sound and picture quality of this film is rather substandard. The aliens themselves are humanoid in shape but lack features and have skin resembling the surface of a disco glitterball.

The main thrust of the film is following the central characters, who are all initially unknown to one another, as they try to figure out what is going on and how they can escape their predicament. Cooperation would appear to be the key, however each has their own very firm idea as to how to proceed.

The premise is sufficiently strong to maintain viewer interest to the conclusion, although at times the behaviour of the characters seems to lack credibility. For example, one would imagine that the first course of action would be to explore the strange new environment they find themselves in, however it appears to be the case that they each go back to bed and have a night's sleep before doing so! The characters all suddenly becoming hysterical near the end seems forced in order to achieve a plot development rather than arising naturally.

The cheapness of the film often undermines plot developments. Whilst it is perfectly reasonable that it would be the woman with the musical background who is the character to learn how to use a sound machine to decode the aliens' language and communicate with them, that she is able to quickly achieve this with a machine capable of playing only six different musical notes and displaying the crudest of graphics seems far-fetched in the extreme.

Ah, I mentioned music. Probably the biggest failing of the film is the musical soundtrack. I use the term 'musical' in the loosest sense, because rather than being remotely tuneful, it is a continual (and I mean continual) bombardment of solemn chords that only serves to maintain a dismal atmosphere throughout rather than to enhance moments of drama or emotion.

It is a shame because even with its limited budget this film could have been so much more. I suspect it was a mistake to reveal the aliens too soon, and the mystery element could have been played up considerably by having the film start with one of the characters waking up in the laboratory with no idea of where they are or how they got there, and then following them as they encounter each of the others and trying to piece things together. As it is, the film rather clumsily gives us the answer first before asking the questions. Having said that, waiting an hour or more to see the aliens revealed only to then discover that they are the rather unimpressive beings depicted in this film would not be a very satisfying pay-off!

Overall then, this film is average at best. It has some nice ideas and will probably keep you watching in order to discover how everything pans out, but you will never once be fooled into believing you are watching a masterpiece, and it's unlikely that this is a film you would be in any hurry to return to again.

Review by DPMay from the Internet Movie Database.