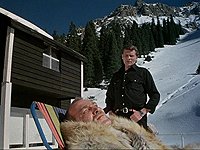 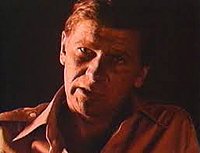 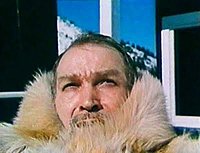 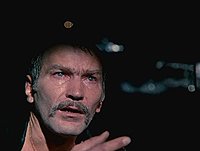 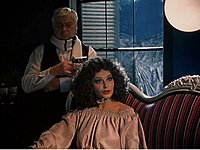 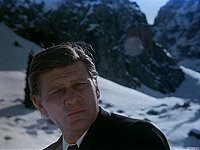 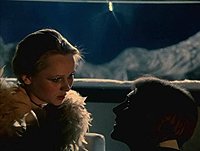 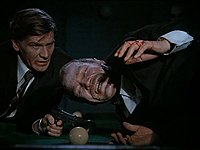 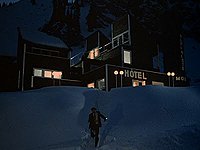 "The Dead Mountaineer's Hotel" or "Hukkunud Alpinisti Hotell" features a very interesting science fiction story and mystery, a production and set design, and an overall look that are ahead of its time. Its interiors have a definite dark neo-noir look that became more common in the 90s and later. Unfortunately, I watched only a full screen version, not the 2.35:1 version of the original, so I missed most of the compositions.

The action takes place in and around a mountain hotel, as in the Alps. Police Inspector Glebsky (Uldis Pucitis) has been called in. He narrates the story which occurred "many years" in the past. When he arrives, there has been no known crime, the proprietor tells him. Only after he is there overnight and an avalanche occurs that cuts everyone off at the hotel is there a suspicious death. Glebsky then investigates and interrogates as best he can the varied people there. It turns out that this is no ordinary case or set of people.

The story embeds a character study of Glebsky, and he stands in for both police and "rationalists". The themes come back to him and to his relationships with the hotel guests. When they sit down to dinner 11 minutes in to the story, we are told that they are "talking about aliens" and the "opinion that aliens have repeatedly visited Earth." When asked his opinion, Glebsky indicates his skepticism: "I'm a strong rationalist. I'm a policeman." He also tells a guest that he is a "common police officer", not a "daredevil". Glebsky will follow the rules and the law to the end, and he will not take any responsibility for an independent decision that goes beyond the law, as he knows it and has been trained to follow it. He will not take into account the special circumstances in which he finds himself. He is very bureaucratic. By refusing to acknowledge that, in fact, the situation he faces involves aliens from another planet, and by thinking of them as nonhumans who are beyond the scope of humane treatment, Glebsky brings about the story's climax. Years later, he has doubts. He wonders whether what he did "was right or not". But he still cannot acknowledge that he might have had the prime responsibility in a non-routine situation.

I see the Glebsky character as standing in for the inhumane, bureaucratic face of the Estonian Communist government of the time when this movie was made.

The aliens in the story have human form. The makeup and lighting sometimes come into play, but also for those who are human beings, as if to show their commonality. The aliens have some powers of creating illusions that can be used to bewilder and confuse the rationalists who assume that seeing is believing. This adds depth andor confusion to the mystery and what is actually going on.

Clearly this movie is a worthy sci-fi movie and also a worthy early entry in the neo-noir sci-fi vein.

Review by msroz from the Internet Movie Database.