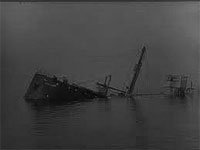 The qualities and faults I mentioned above with respect to A TRIP TO MARS (1918) pretty much apply to this film as well - with which it's been ideally paired on an otherwise bare-bones DVD from the Danish Film Institute. Still, I'd give the edge (if ever so slightly) to THE END OF THE WORLD - even if it does take forever for the titular cataclysm to begin!

In fact, the first half gets bogged down in scenes of domestic melodrama - though these are countered by interesting passages involving a wicked financier, who's willing to cheat at the stock market by having the catastrophe downplayed in his papers! Amusingly, he then makes a fist at the sky whenever he happens to glimpse the falling meteor (an obvious painting, it's visible at all times) because it will naturally mean his ruin (he seems to be less concerned, however, that it will most certainly also prove to be his undoing in a physical sense!). He still decides, somewhat perversely, to hold a 'last day on earth' meal for his family and friends - since he intends to escape through a secret passage which leads from his house to the underground mines he owns...but hadn't quite counted on the working-class, who have themselves planned to 'celebrate' the apocalypse in grand style (by turning on their long-standing aristocratic oppressors!).

The scene in the mine actually displays some atmospheric lighting - and the special effects, though clearly primitive, are fairly effective (in particular, the images of the mining-town with the smoke from its factory-chimneys mingling with that from the flaming meteors). The catastrophe also sees the town convincingly flooded; an elderly priest's subsequent clumsy attempts to control a boat in water provides some unintended chuckles. The ending - following the disaster, a couple is reunited - seems to be reaching out for spirituality, but the fact that only they (and the aforementioned priest, who had been practically holed up in their house the entire film!) seem to have survived makes it look contrived more than anything else...

By the way, renowned French film-maker Abel Gance made a similarly-titled film in 1930; regrettably, when it was broadcast (for the first time ever in my neck of the woods) on late-night Italian TV - incidentally, on New Year's Eve of 2005 - I missed it...because, at the time, I was staying in Hollywood!!

Review by MARIO GAUCI from the Internet Movie Database.