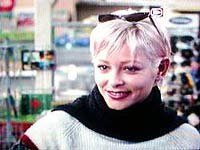 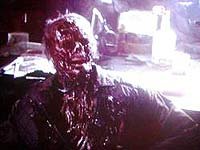 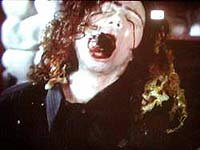 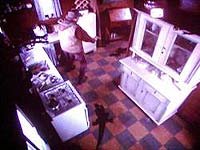 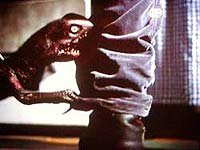 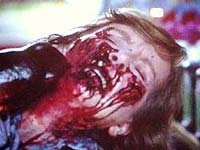 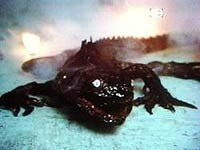 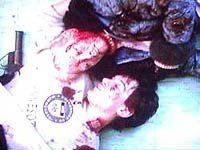 We're talking about, "Aberration, A 1997 movie, Directed by Tim Boxell, and Written by Scott Lew, and Darrin Oura. Spoiler Alert, I will be talking about it, watch if you like, it is entertaining to a point. Then come back and see if I'm on target. There use to be something called "camp". This movie defines it. Suffice to say that my favorite actor was Merlin the Cat, The small but earnest cast tried their best with the comic book dialogue they were given.

OK the story, Talking about targets, Our lady with a shady past, Amy Harding played with spunk, by Pamela Gidley, is one sharp shooter, unlike the dorky collage student, who talks to himself a lot, Played with evolving dumbness, by Simon Bossell as Marshall Clarke. The lad is clearly blinded by Science. These are the main players the rest are just the usual lot of victims, save for the Macho Ex boyfriend that she stole fifty grand from. Uri Romanov played by Valerie Nikolaev. Playing it like he was from another movie. Like a sharpshooter in a gallery arcade Only in this movie they got him shooting pop out rubber lizard heads. No kidding, see these things are suppose to be mutant geckos. To spice things up, they are evolving defenses by the minute. Yep unkillable. Even with Amys amazing twenty one shooter. Mashall is no slouch himself with his thirty seven shooter shotgun,

The movie got everything you want from a low budget production, fitting all the used plot devices they could on a shoe string, and a "figure it out as we go", attitude that dares to take every cliché to heart. Start with the obligatory Bath scene, where Amy is directed to do everything she can, not to hear the monster in the room, want More? Lets see, the Hunter looses his dog, How long will the cat last? too bad,

We get a lot of stomping eggs, shades of "It", They make disgusting squishing sounds, It will drive some fetishist crazy

We also get to see them drive and breakdown twice, in a snowstorm; blinding one moment and clear in the next shot. Keep these guys away from cars or trucks, every one they touch goes Boom. The cinematographer fancies himself working on far more artistic endears The stark whiteouts which is impressive the first time, is repeated eight times throughout the film, likewise the knocking down furniture looking for the rubber tails, three times. The creatures are equal opportunity biters, everybody gets bit. What if it spits in your eye, but you are wearing glasses? You take em off. Lots of Hokey fun here I would give it a, gets tiresome; Six out of Ten ("Oh no, they killed my cat") Stars.’╗¿.

Review by gpeltz from the Internet Movie Database.