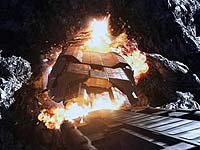 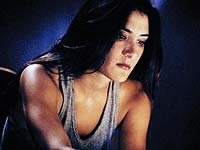 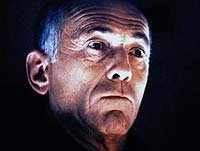 Although filled with special effects and sometimes advertised as a sci-fi film, "Velocity Trap" is really an action film. A "Die Hard"-clone set in space. But since I loved "Die Hard" and especially "Under Siege", I decided to buy the film and check it out. Now that I have, I'm not disappointed at all although there were a few flaws.

The hero of this film is Olivier Gruner. His most famous film is probably "Cyborg", directed by the legendary Albert Pyun, but he has been in several other films as well. My personal favorite of his films is "Automatic", a surprisingly inventive action film with great fight scenes. Gruner definitely has the right stuff to be an action hero. He has "the accent", his fight scenes are always great and he even has a sense of humor which is especially apparent in "Velocity Trap". Not only that, he even starred in a family film(!) "The White Pony" and didn't look out of place.

Now, the plot here is nothing special but I guess nobody expects or even wants it to be. This is after all an action film, not "Boys Don't Cry". However, there are some pretty interesting humorous details in a few scenes. For example, there's a scene where Olivier Gruner is dancing ballet by himself! I thought Mark Dacascos singing karaoke in "Drive" was something but I was wrong. _This_ scene is something! There are also some good bits of dialogue here and there ("Can't take a joke, Stokes?" "Actually, many people find me very funny" or something along those lines).

The director is Phillip Roth who's previous work includes "Digital Man" and "Darkdrive". Although his films usually have a pretty low budget, they have some quite good effects and that is the case in this film as well. The chase in the end of the film is surprisingly effective and there are no obvious "bluegreen screen-effects". The sets also work pretty well but the music was a letdown. It lacked a good theme and the underscore wasn't that great either. This film would have benefited greatly from a futuristic and energetic synthesizer score.

Also, while this is one of the best films from Phillip Roth, it lacks one key element that I expected from it: fight scenes. There's a fair amount of gunplay, some good stunts and some pretty nice explosions but I think fans of Olivier Gruner (myself included) were expecting more fights. As it is, there's really only one fight scene in the beginning of the film and even that is quite short and unspectacular.

Anyway, this is an effective action film. It doesn't even try to re-invent the genre but it's never boring. All in all, a very good effort from Mr. Roth, but the next time, a better score and more fight scenes, please! This one gets a 7.

Oh, and by the way, the DVD includes a great commentary from Phillip Roth, special effects expert Andy Hoffman and Olivier Gruner himself. This is one of the best and most entertaining commentaries I've heard since the commentary of "Darkdrive", which also includes a commentary by these guys (except Gruner) although it isn't even listed as a feature on the DVD box cover. In case you've heard the commentary of "Velocity Trap", I can tell you that the name of the actor they couldn't remember in the beginning of the movie is Yannick Bisson (here credited as Yannock Bisson, a typo perhaps?) and his show that they refer to is, of course, "High Tide" (a great show, also starred Rick Springfield). I recommend renting the DVD just for the commentary.

Review by tp320 from the Internet Movie Database.