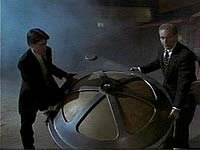 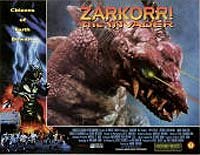 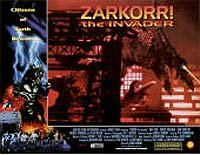 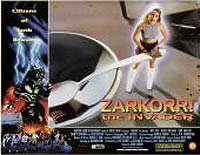 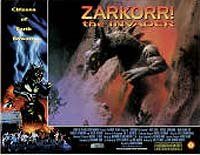 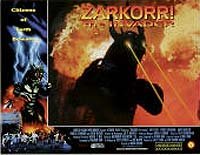 This is an utterly forgettable picture. A friend of mine picked it up in a bargain bin at a local rental place for $.50. He should have demanded a refund. Or at least a discount.

The plot is something like this: A giant monster threatens the earth and aliens decide that the most average human being on the planet must be chosen to save the earth. Thus a tiny holographic space alien appears before a postal worker and tells him that he's "it."

The devil is in the details when it's time to rate a movie, and on that count Zarkorr! The Invader fails miserably. The monster Zarkorr only has a few brief moments on the screen, totaling maybe 5 minutes tops (with a generous estimate). The cute alien hologram has even less screen time and might be the most interesting character to look at, and only because she's wearing a "teeny bopper" stereotype outfit, complete with a teasingly short pleated skirt. The climactic final battle with the monster is over before you can say "Whiskey Tango Foxtrot, over." In the next moment you are left to ponder whether you've just experienced a train wreck or if someone just drained 3 pints of blood out of you.

Admittedly though, this movie did deliver one line that my friends and I to this day still repeat and laugh at and was about the only bright spot in this otherwise abysmal picture. As the cast of "protagonists" is being "interrogated" by the fuzz, one of them responds to the questions with the statement "What are you, some kind of a question asker?" It is delivered in such a preposterous manner that if you're sitting with a group of friends (who won't be your friends long if you actually talked your friend into watching this) you may actually experience a howl or two of incredulous laughter.

While this is no Manos or Eegah (It's not even bad enough to be classically bad) this movie will still bore you with its awful dialog, unimaginative characters, and nonexistent special effects and still deserves to inhabit the bottom 100.

Review by chrono-1 from the Internet Movie Database.