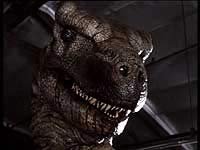 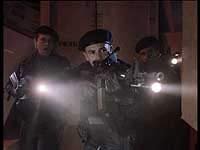 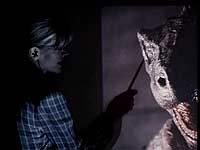 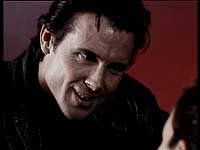 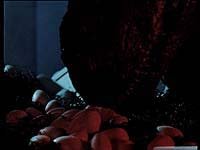 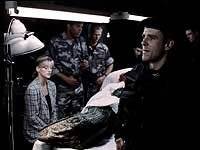 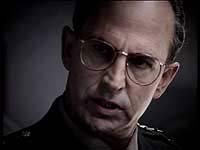 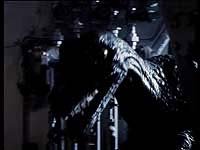 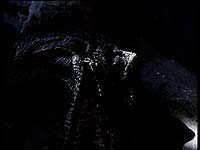 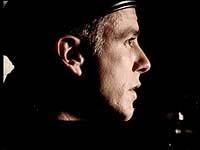 Carnosaur 3: Primal Species starts as an American army convoy is ambushed by a gang of terrorists thinking that it is transporting uranium, the terrorists kill everyone & drive off in the trucks. They stop at a warehouse on a dock where they're leader Dolan (Cyril O'Reilly) opens one of the trucks expecting to find the uranium, instead they discover genetically reconstructed Dinosaurs that attack & kill them all. Meanwhile the army has sent Colonel Rance Higgins (Scott Valentine) & his anti-terrorist unit in to sort things out, unfortunately they are attacked by the Dinosaurs as well & half of the squad is wiped out. The warehouse & dock is sealed off so the Dinosaurs cannot escape & Rance is told he & his team are to capture the Dinosaurs so blonde scientist Dr. Hodges (Janet Gunn) can continue her experiments on them, without weapons, with only a few men & orders to bring the Dinosaurs back alive Rance has his work cut out just to not end up as Dinosaur food let alone complete his mission without further loss of life & it becomes apparent that it's not exactly clear who is hunting who...

Quickly following Carnosaur 2 (1995) which itself followed Carnosaur (1993) & directed by Jonathan Winfrey (who apparently has a part in the film as someone called Bob although I don't remember anyone by that name) the Carnosaur series of films aren't getting any better are they which Carnosaur 3: Primal Species proves beyond any shadow of a doubt. I now have had the 'pleasure' of sitting through all three Carnosaur films & actually in chronological order too! Lucky me. This time round the scripting duties went to Rob Kerchner & it's basically a mix of ideas & rip-offs from Aliens (1986), Jurassic Park (1993) & Deep Rising (1998) (yes I know Carnosaur 3: Primal Species was made a couple of years before Deep Rising), I'd probably put Carnosaur 3: Primal Species as the worst of the series.. The film is far too predictable & by-the-numbers I mean there's the Dinosaurs, the team of military soldiers who can't use their weapons & the final 30 minutes which has the soldiers & Dinosaurs hunting each other within the confines of a huge ship. That's all there is to it really, a few people are killed by the Dinosaurs before the hero saves the day & gets the girl, the end. All the trappings & shortcomings of the low budget horror film are here, annoying character's, bad one-liners, stupid decision making, illogical plots, bad special effects & poorly researched science. However, having said that while I wouldn't describe Carnosaur 3: Primal Species as a good film at least it's short at 80 odd minutes, it moves along at a fair pace & isn't too boring, it's perfectly watchable in a (really) bad sort of way & as long as you have sufficiently low expectations it might keep you quiet for an hour & a bit.

Director Winfrey obviously doesn't know how to shoot special effects as the Dinosaur scenes are the worst in the entire Carnosaur series, the T-Rex at the end looks pathetic. It looks like something made by kids as part of a school project from paper mache! The Velociraptors are just guys in poor looking rubber suits that don't seem to have any movement in them at all, Winfrey tries to use quick edits & strange camera angles to try & cover up some of the suits deficiency's & inject some life, pace, threat & menace into them. He fails on all counts. The blood & gore has been toned down in Carnosaur 3: Primal Species, there are a few mutilated bodies, some severed limbs & various bit part character's have they're arms & heads bitten off.

Technically the film is average, there isn't much style to it & the special effects really are embarrassing at times. The music rips-off the theme from Predator (1987). The acting wasn't great & you could tell everyone in front of the camera knew they were making crap.

Carnosaur 3: Primal Species is an OK way to pass the time if you like bad low budget horror films much like myself, however there's very little here by which I could recommend it to any normal member of society. To add to his long list of credits Roger Corman produced. The opening ending suggests that a further Carnosaur sequel could be made, I can hardly wait... Like the other Carnosaur films footage from this was edited into another Dinosaur themed Roger Corman beauty called Raptor (2001).

Review by Paul Andrews from the Internet Movie Database.