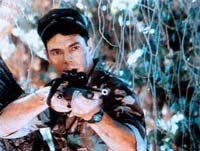 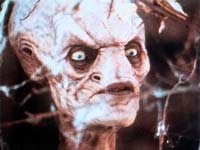 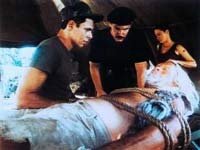 A team of most unlikely Marines is sent to defuse any spent artillery rounds or unexploded bombs that might be left on an island that was used as a gunnery target. (Before that, it was an internment camp for Japanese citizens.) The island seems overrun by tame white rabbits. A detonation showers the team with human bones. ("It was probably a graveyard.") Some deranged old white guy shows up screaming, most likely mad. Another detonation blows the corner off a hidden cement shelter that oozes glop that seems to dissolve skin. An alien appears among them. In other words, things seem to be getting a little hairy.

But then none of this really comes as a surprise because things have been hairy from the beginning, starting with the half dozen members of the team, a bunch of wise guys goofing on their new leader, a stern Lieutenant Commander wearing the wrong cap (he's one grade below the scrambled-egg level). The Marines seem to dress any old way they want, wearing their caps backward like baseball hats. There's a woman among them. She wears only what I believe is called a singlet. In one shot a Marine takes cover carrying a bolt-action rifle. One of the team openly smokes crack. They all look like bums.

It's not so much the wardrobe or props that turn this potentially interesting, if already familiar, story into the wreck that it is. It's the clumsy writing and the indifferent direction. The gold is there but no one has separated it from the dross. I mean -- an island that has been deserted for fifty years. Scattered live ammunition. The left over camp in which human beings were forced to live during World War II. What a fascinating place to explore, all by itself. But no atmosphere is captured, no real mystery or suspense generated. They go ashore on this deserted island and everything begins to happen, one thing after another, really FAST, as if to prevent the audience from being bored because a scene lasts longer and is more revealing than a Head On commercial ("apply directly to the forehead!"). When I was a kid I explored an empty army base, Fort Hancock, NJ, and stumbled across a pile of live 20 millimeter shells abandoned in a swamp. Not knowing better, I tried juggling a few of the unstable things. Now -- in retrospect -- THAT was exciting. This isn't. It's less mystery movie than slasher.

You can do a lot with a small budget, but you have to put some care into what you're doing first.

Review by Robert J. Maxwell from the Internet Movie Database.