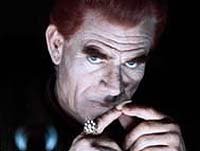 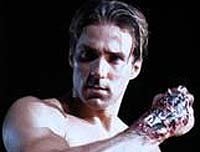 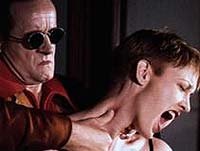 Keith Cooke, the cult superkicker who many people would have loved to see in more movies, achieves something of a career pinnacle with HEATSEEKER -' the only starring vehicle he's had as of this writing. Disappointingly, this high point does not exactly constitute a highlight: consistently flawed despite a decent premise and an explosion of physical talent, the film just barely manages to scrape a decent rating through sheer sweat and grit. I don't recommend it, but the B-movie aficionado in me won't allow a lower ranking.

The story: In a future when organized combat is waged by technology-enhanced cyborgs, the single 100% human fighter (Cooke) is forced to enter a deadly tournament by a ruthless corporate agent (Norbert Weisser).

Cooke is in great shape and shows off all his best taekwondo moves, but his character is bland beyond all likability. He and the rest of the performers are at the mercy of a script that directs its energy into unwanted venues. The crux of the story is the kidnapping of the lead's managerfiancé: Tina Cote was one of the movie's few opportunities for some dramatic worth, but her character spends most of the feature being mind-controlled and molested by the villain in a far-fetched plan to get bad guy fighter Gary Daniels to fall in love with her and be a better competitor. Cooke's character is left almost completely in the background. It's an oddly joyless story, plagued by an epidemic of white characters with Asian names: Daniels is called Xao, fighter Chad Stahelski is called Chung, and in what I assume to be a purposely ironic liberty, Norbert Weisser's character is called Tung and spends the movie adorned in teashade sunglasses.

The fight content becomes the picture's last opportunity for entertainment value, and overall, it succeeds (though to what degree diminishes as viewers' expectations rise). A whopping 20 full-length fight scenes almost guarantee that there will be at least some matches for anyone to enjoy, and the cast includes a nice selection of on screen fighters like Thom Matthews, Burton Richardson, Jahi Zuri, John Machado, and Richard Cetrone. I was pleased to see that significantly less slow motion and obstructive editing has been utilized than the norm for director Albert Pyun's movies, though the choreography tends to be bland and the pacing of the matches is far from dynamic. While not nearly matching my hopes, the CookeDaniels dream matchup is decent, though my favorite fight of the feature is a winning effort for Pyun regular Earl White.

There's a bit of B-movie abandon to just keep things entertaining enough throughout, including an odd scene in which Cooke is beaten unconscious by some thugs for no reason before having his clothes stolen by children, leaving him to run naked through Manila. Maybe experiences like that limited the man's willingness to submit himself to the whims of a director, but whatever the reason why ol' Keith never received top billing afterwards, you can be assured that the ranking of his credit does not indicate the quality of this movie. I better post this before I rethink my generosity....

Review by The_Phantom_Projectionist from the Internet Movie Database.