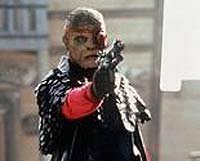 It's obvious that "Oblivion" is supposed to be a light-hearted adventure and a novelty fusion of Western and Science Fiction. And that would have been fine if Full Moon had actually produced that. Instead, we got a half-baked effort that needed a lot more work and polish. (But if we got that, it wouldn't have come from Full Moon, would it?)

First warning that things might not be as good as you'd hoped: the script is by Peter David. Now, Peter David is very good at what he usually does - writing off-beat, wry interpretations of familiar comic tropes. (His runs on "X-Factor" and "The Incredible Hulk" are classics of the genre). But it is tricky to make a successful transition from the comic page to the movie screen, especially when it comes to dialogue, especially FUNNY dialogue. (Just ask Roy Thomas or Gerry Conway, two fine, hard-working comics writers who co-wrote a "Conan" sequel that was one of the most embarrassing things to appear in the 80s or 90s). You can see how most of this would have been good if it was handled right. Instead, the cheap, off-hand, "just point the cameras and let them roll" direct-to-cable quality hamstrings everything. I'm certain that David was not happy with the results.

2nd warning that things might not be as good as you'd hope: the "Muppet"-like thing perched on top of the town sign in the opening credits just doesn't work. It's generic, badly animated, and looks as if someone walked off with a discard from the set of "The Dark Crystal".

And from that point on, the cheapness and shoddiness of the production undercuts everything. Nothing works here. Not the art direction, not the sets (which have a very unconvincing "ceiling fan" motif), not the plot, not the special effects, not the in-jokes.

I felt bad for George Takei, whose four "fan service" references to "Star Trek" whiff harder than a Pee-Wee batter facing Major League fastballs. In fact, I felt bad for nearly all the actors, and I doubt most of them will call a lot of attention to 'Oblivion' on their CVs.

"Oblivion" is not outright awful on an Ed WoodJerry Warren level (except for the "Star Trek" fan service.) No one blows their lines, some attempt is made at action and humor, Meg Foster is still hot in her spandex uniform, and about 1 joke in 5 sort of works. But you don't need to see this one unless you want to see every science fiction film ever made.

Review by lemon_magic from the Internet Movie Database.