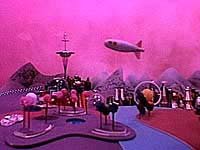 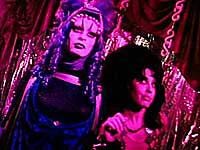 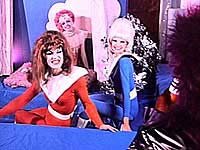 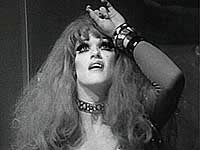 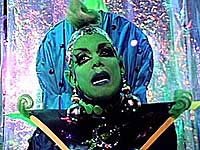 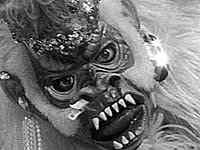 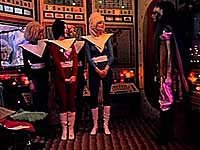 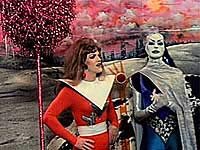 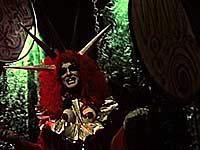 To save the universe? Would you change sex? Alright, I give, but that's what the tag line says, so I'm just going along with what marketing offers.

Being that Troma distributed the film, you know it's going to take a turn for the low-budget, bizarre screaming for play on MST3K. And if the show was still around, I'm sure they would have eventually covered it.

So a crew of effemminitely burly "dudes" (as they refer to themselves quite often - yet I don't refer to myself as a "dude" or even girls as "chicks" - must be an '80's California thing) change into women to stop some sort of naughtiness about jewel thievery on a pleasure planet. So it's a plausible (if goofy) concept to get to the planet, and all of the men on the ship seem perfectly fine with becoming women, so I take it this is a pretty easygoing crew of galaxy savers.

And yet, when they get there, the more they stay, the crew seems less and less interested in saving the universe than they do in exchanging fashion tips. And while this may be all well and good for some, even in their new forms, I would think that saving the planet from destruction would be just a little more important than a song and dance number.

I never expected this to be a serious film (I don't think the filmmakers did, either), and given that they apparently did this all in one apartment is pretty impressive. And there are a few funny one-liners scattered throughout the film. But I think this was a film meant to highlight the leading actor/actresses more than anything else. It just seemed to run more and more out of steam by the time the movie was over, and the chase scenes... well, they were definitely there.

So as a "cheesy movie", it excels. It would be great to have a group of friends over and poke fun at it (even if the end scenes start to drag, and why does the crew never mention anything about an option to return to their original selves?). Otherwise, this is a film that has to be taken with a grain of salt. Or something.

Review by GuyCC from the Internet Movie Database.