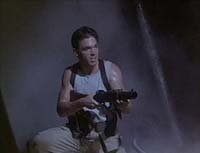 Considering how many tantalizing avenues were suggested but not explored in the surprisingly killer original Xtro, it's initially disappointing that The Second Encounter opts to all but abandon the entirety of its predecessor in favor of a more generic humans vs. alien bug-hunt venture. However, if you can ignore the seen-it-all-before pastiche that drives this follow-up, there are enough entertaining aspects of Xtro II to make it a decent way to occupy yourself for 90 minutes.

This is a film that doesn't just borrow ideas from other movies, it blatantly copies plot elements and even entire sequences from its source materials. The gist of the story is basically a smaller scale version of Aliens, and the references to James Cameron's brilliant monster mayhem extravaganza are so numerous and obvious that The Second Encounter bears more resemblance to that film than it does to the modest creature feature its title name-checks. The grainy video feed images the armed heroes broadcast to their command post and the extended dwelling inside ventilation ducts and dripping smoke-filled corridors during the action sequences are resoundingly familiar, and there's even massive hip-mounted weaponry utilized here that almost precisely mirrors the impressively imposing machine guns Colonial Marines Vasquez and Drake carried into battle on LV-426. Our scientist-turned-warrior heroine is clearly modeled to be an amalgamation of Ellen Ripley and Sarah Connor, and this homage is greatly heightened by actress Tara Buckman's often startling resemblance to Linda Hamilton. Hell, even the lurking creature itself looks more like an Alien than the being from Xtro, so there really aren't too many moments in this monument to undisguised mimicry that aren't accompanied by a striking sense of deja vu.

If you can forgive The Second Encounter for all of that, then you'll find plenty to keep you amused in this unabashedly B-caliber sci-fihorroraction hybrid.

It's curious why this was even pegged as an extension of Xtro, since nothing in the story even remotely draws upon the events of that outing. The happenings here are set in a top-secret subterranean facility called Nexus, where a team of scientists have developed a device which can instantaneously transport researchers to distant dimensions to make contact with whatever alien lifeforms they might find there. After three explorers disappear through the portal and only one comes back, the Nexus team scrambles to organize a rescue party and stabilize the traumatized survivor so that they can learn exactly what happened during her visit to regions beyond (what they don't know is that her close encounter came back with her). To help remedy this snafu, Dr. Shepherd, a disgraced former Nexus administrator, is brought back into the fold, along with a small squadron of heavily armored soldiers, who are mostly on hand to snarl out charmingly inane alpha male dialogue and provide some firepower to combat the unknown alien assailant.

Early on, reference is made to the destruction of an identical installation in Texas at the hands of Dr. Shepherd, who was previously the only one to successfully return from a teleportation into deep space. The chasm between this back-story and the first Xtro film is so wide that at first it seems like a sequel we didn't know about was made in between the two movies, and the establishment of that portion of the narrative gets this outing off to a rather sluggish start. But once the monster tears its way out of the chest of its unwitting host and begins whittling down the cast, the film moves along at a fast clip, packing in plenty of gore and a couple of sturdy jump scares to keep things interesting.

As the battle between man and mucous-covered beast plays out, the movie falters a bit by relying on a few befuddling and corny set-ups for some of the carnage. My favorite of these concerns the fate of one member of the heavily-armed and highly-trained strike force, who's perfectly willing to cross the threshold into an unknown world and confront the mysterious menace there when the mission begins, but later freezes up in utter terror when he's called upon to climb down a ladder, a bout of hesitation that leads to him meeting the business end of the monster's razor-sharp claws.

As before, the creature effects are well-realized, and the expansive sets which bring the interior of the complex to life are especially nicely rendered considering the film's budget. None of the bloodshed rivals the delicious high-points of the first Xtro, but the allotment doled out here is likewise handled solidly.

Granted, this movie does require you to sift through a fair amount of mediocrity and outright stupefying implausibility (I dare you to figure out how one of the soldiers is able to detonate a C-4 charge a few inches away from his face without suffering even a scratch). But if you're in a generous mood and don't mind turning off your brain for an hour-and-a-half, The Second Encounter is an enjoyably mindless romp.

Review by happyendingrocks from the Internet Movie Database.