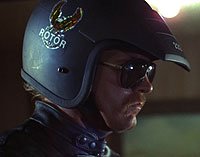 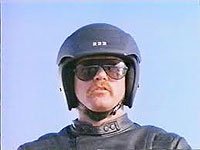 Somebody apparently wondered, "What if Robocop went bad like the Terminator?" and thus ROTOR was born. While the idea of Robocop being evil and going on a murderous rampage has potential, it is a massive failure due to gross incompetence. But at least it has the decency to fail spectacularly.

Should I start with the fact that the male lead is named Coldyron ("Cold Iron")? The fact that he is obviously dubbed? The fact that our first shot is of an empty freeway while a voice-over claims it's in gridlock?

Maybe I should start with the dialogue. The dialogue in this movie is some of the silliest I've ever heard. There's inane technobabble, ham-fisted philosophical discussions, contradictory statements, failed metaphors (the one about skeletons in a tin coffin in particular) and nonsensical one-liners. The most memorable exchange involves the main characters discussing the use of "illogic" to stop the renegade robot. I don't have room to transcribe it but it's on the quotes page here. It's a real masterpiece.

The characters are even more ridiculous than the dialogue. There's Willard, the comic relief police robot, Buglar, the psycho police chief, Dr. Corinne Steele, jive-talking janitor Shoeboogie, and ROTOR himself.

ROTOR fails to inspire fear as a villain, instead resembling an amalgam of the leatherman and the cop from the Village People. He is supposed to walk through some chairs effortlessly but visibly struggles. When he tries to grab people he conveniently reaches over their heads. He is supposed to be this emotionless killing machine but visibly shows anger many times. Shoeboogie is this ethnically confused Casanova wannabe who only appears to accidentally awaken ROTOR and then inexplicably disappears.

And then there's Dr. Steele. This character has to be seen to be believed. She is played by a steroid case with a skunk mullet. They try their hardest to feminize this hulking brute by putting her in full makeup, dubbing her voice with a more feminine one and putting her in an ugly dress and glasses but like most everything else in this movie it fails.

The pacing is atrocious. It takes so long to show the hero's morning routine at the beginning that it felt like it was being shown in real time. We spend another five minutes watching him have lunch and dinner with his girlfriend, a character who serves no purpose. We see him fight off random thugs at a mini-mart and we even get to see the store clerk karate chop one of the robbers. All of this occurs before ROTOR wakes up. A third of this movie could be cut, at least.

The production values are no better. Most of the acting is awful. The only passable performance is from Margaret Trigg, who plays the damsel in distress. Richard Gesswein, who plays the male lead, looks like he's perpetually constipated and Dr. Steele barely registers a pulse despite valiant efforts to dub her with a more convincing and emotive voice. Shoeboogie, the oblivious janitor, is the epitome of a jive turkey. As bad as they are, the extras are even worse. The only character I could stand was the police robot, Willard. His primitive design and goofy one-liners actually made him sort of endearing. Fight scenes are hopelessly telegraphed and performed like the actors are on sedatives.

The characters act like idiots. ROTOR's weakness is a car horn yet Sonya, the woman who becomes ROTOR's prey over a speeding violation, is the only one who thinks to use this against him and even she seems to forget when it's plot-convenient. The hero finds her, tells her to drive around aimlessly all night and she does it! Dr. Steele shoots ROTOR once, then drops the gun to fight him bare-handed! The film ends with Dr. Coldyron getting gunned down in broad daylight in front of a police station. ROTOR has an absurd feature called "Sensor Recall," an ability that lets him literally see the past but yet he's weak to car horns, and lastly, the ordinary citizens of Dallas seem unusually hostile towards ROTOR, despite the fact that there's no reason for any of them to suspect that he's anything other than a normal human police officer.

There is ineptitude behind the camera too. They negate the colors to display electric shock, day switches to night at the drop of a hat, many conversations occur over the phone or outside of a car or a building. The ROTOR demo film is an obvious miniature model with bad stop-motion. Dry ice is used for smoke. The obvious scare chords are cheap and hilarious. The climax features multiple lassos appearing out of nowhere to ensnare ROTOR and a showdown between Dr. Steele and ROTOR is filmed out of focus and fifty feet away. Even the credits have mistakes (note the botched copyright notice, the absence of billing for Shoeboogie, and the song sung by "Larry's Dad").

There's so much to talk about in this movie I barely have room to cover the plot. Just picture Sarah Connor being chased by a Radio Shack quality T-1000 while Robocop's OCP corporation and a female Arnold Schwarzenegger go out to try and stop it and you'd be in the ballpark. The filmmakers were sadly so deluded they set up a sequel with Coldyron's nephew and a new ROTOR designed to resemble Dr. Steele. After the trainwreck that is this movie, you can only laugh at such hubris.

Review by allexand from the Internet Movie Database.