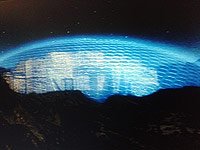 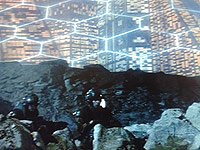 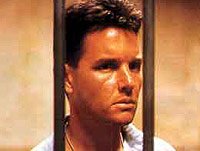 Sci-fi junkies may derive some entertainment out of the silly time killer "The Time Guardian". It's often incoherent, and is of no real substance, but it's amusing often enough, and just clunky enough, to make it adequately diverting for those with a fondness for cheese. Those intrigued by the presence of Carrie Fisher ("Star Wars" episodes IV to VI) and Dean Stockwell ('Quantum Leap') may be rather disappointed with the overall results, but if one isn't too demanding, it may put a smile on their faces. The special effects, sets, music, acting, and action sequences are mostly passable.

It takes place in the Earth of the 41st century when humans are overwhelmed by a new adversary: half organic, half machine villains called Jendiki. Fortunately, some of the humans inhabit an entire city that has the ability to travel through time. The city transports itself back to the Australia of the 1980s in an attempt to change the future, with troopers Ballard (a tough, snarling Tom Burlinson ("Flesh + Blood")) and Petra (Fisher) sent ahead as scouts to ensure that the spot chosen for landing will be safe. Of course, the Jendiki are hot on their trail, and Ballard and Petra have to deal with them as well as with crooked local cops. One good thing for Ballard is that he meets perky young Annie, played by the insanely gorgeous Nikki Coghill of the Aussie TV series 'Neighbours'.

As directed by "Mad Max 2" co-writer Brian Hannant, "The Time Guardian" can't boast any truly memorable set pieces, but it's an easy enough to take bit of fluff. Fisher does what she can with a spunky role, but Stockwell is utterly wasted in his part, the "boss" of the city. Burlinson would have fared better had he played his part with a little more humour. But Coghill is quite charming, and goes topless for a sexy swimming scene. Peter Merrill chews up the scenery as head bad guy Zuryk.

This movie may be a trifle in the end, but it does wrap itself up fairly quickly, clocking in at a brief 88 minutes.

Review by Scott LeBrun from the Internet Movie Database.