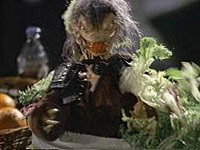 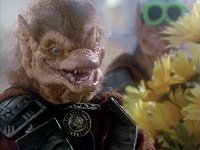 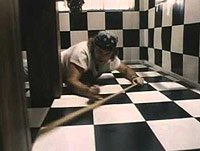 And that's a bad thing, because at least if this had been a Troma film, it would have had wanton violence and a greater sense of anarchic abandon that might have brought my rating up a bit.

So what we have instead is a very tame (rated PG), barely lukewarm, low budget (Roger Corman produced it with an unknown director who has subsequently remained unknown) Gremlins (1984)Critters (1986)-wannabe with almost exclusively flat humor, little of the logic that made Gremlins work so well--fantasy logic or not, no suspense, no sense of adventure, and no violence or nudity to make up for it.

Although I'm sure some of the problems with the film are inherent in the script--let's face it, no one could deliver these jokes so that they would be funny--it seems like the biggest blame has to fall into the lap of the director, Bettina Hirsch. In more capable hands, Munchies could have been entertaining.

After all, it starts out like many great adventure films. Simon Waterman (Harvey Korman) and his son Paul (Charles Stratton) are in Peru on an archaeological dig. Simon is a bit of a wacky archaeologist who is always floating theories about the connections between ancient sites and alien civilizations. For example, he thinks he sees evidence of laser-cutting on ancient stonework. So they're at Machu Picchu looking for more evidence of Simon's theories when they happen upon a secret chamber. Inside they quickly find the animal they later dub "Arnold", one of the titular munchies.

They take Arnold back home to their small California desert town. Simon, who thinks that Arnold is probably an alien creature, has to go off to a colleague's lecture, and he plans on telling the colleague that he finally has an alien specimen. Paul and his extremely cute girlfriend, Cindy (Nadine Van der Velde), are left in charge of Arnold, but as they haven't seen each other in a long time, they leave Arnold unsupervised while they hop in the sack.

Meanwhile, Simon's brother Cecil (played also by Korman in a dual role), owner of a successful snack foods company, is eager to buy off Simon's home and land--they're adjacent to his own. Simon doesn't want to sell, so Cecil hits upon a scheme to steal Arnold. Things gradually spiral out of control, and the munchies, who have a mean streak to go along with their cravings for junk food, begin to overrun the town.

That reads better in a summary than it plays on the screen. The best shots in the film are those with natural landscapes in the background, such as when characters are driving on the outskirts of the desert town. Interiors, with the exception of Cecil's home, tend to look like poorly decorated, cheap sets, and more importantly, they tend to show that Hirsch is not very skilled at blocking and setting up shots. Oddly, given the paucity of the production design overall, Cecil's home is quite a gem, imbued as it is in overblown 1980s style down to the smallest details, and Cecil's stepson, Dude (Jon Stafford), was an amusing counterpoint. Too bad, then, that he's out of the film so quickly.

At any rate, Korman is a fun actor, but he comes across much better here as Simon than as Cecil. Unfortunately, Simon ends up being absent for most of the film. Cecil, who is differentiated physically by a ridiculous wig and facial hair, is not only the "evil capitalist" of the film, he's one of Korman's classic inconsiderate, boorish characters--that was one of his specialties, frequently capitalized on in "Carol Burnett Show" (1967) skits. Unlike "The Carol Burnett Show", which tended to succeed because directors Clark Jones and Dave Powers had a studied way of pushing the skits just to the brink of chaos, Hirsch reins Korman in way too far, and the Cecil character just doesn't work the way it should.

There are a lot of other director-related problems, not the least of which is wonky pacing and editing, which completely sap any possible suspense or compelling dramatic impact from the film. Even scenes that should have been shoe-ins for amping up the drama--such as when the munchies are harassing an old lady on the road--are put together far too awkwardly to have much affect.

There are also serious logical problems with the story as it stands. Where did the munchie in the chamber at Machu Picchu come from? The film's trailer seems to show an answer to this, but it was edited out of the final cut. A more serious problem is that, unlike gremlins, there is no clear reason for munchies to go from cute, cuddly furballs to menacing monsters. It just happens. Further, because Munchies was kept PG, and the violence remains toned down, when the creatures are in their monster phase, they're never very threatening. They're also easily dispatched, at least temporarily.

Admittedly, the gist of the film isn't suspense, horror, compelling drama or any of that other stuff, but humor. It's intended more as a spoof of Gremlins and the countless rip-offs in its wake. The only problem with that is that the film just isn't funny, even though I chuckled a couple times. A surprisingly high percentage of the jokes are bland clichés. Too much of the remaining material consists of non-sequiturs. Given bad timing from Hirsch, it all just falls flat. There was potential to make a film that while a spoof, was both funny and frightening, hilarious and disturbing, cheesy and suspenseful, all at the same time, ala Killer Klowns from Outer Space (1988). Too bad, then, that Munchies comes nowhere near that.

Review by Brandt Sponseller from the Internet Movie Database.