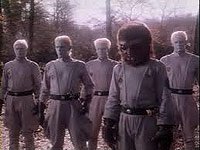 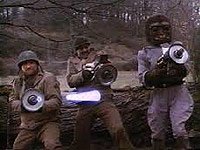 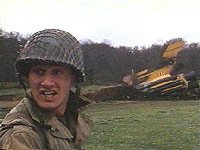 I was scanning some titles at a local video store when I happened upon a bizarre little film called Zone Troopers. A group of American soldiers in WW II stuck behind enemy lines, run across a crashed alien spacecraft. The box art looked promising, but my expectations were low. Surprise! This movie was actually entertaining. Sure there were some gaping plot holes, the script wasn't exactly academy award material, and the alien costume left a little to be desired, but I had no trouble getting into this film. It never got boring, I even became attached to a few of the characters. This won't top anyone's movie list, but it's definitely worth a watch. For Full Moon fans out there you'll be happy to know that Tim Thomerson, the "Dollman" himself, acts as the Sarge in Zone Troopers, easily my favorite character of the bunch.

Review by PhilosophicZombi from the Internet Movie Database.