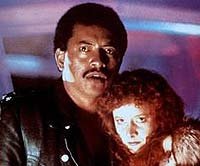 The movie usually begins the same: a lone hero awakens and starts his day as usual. But there's a catch when he realizes that he is the last man alive. Fruitlessly, he scours the land for others only to find there is simply no one else. He slowly starts to piece the mystery together (disease, nuclear holocaust, science experiment gone haywire). Then a wrinkle is added, the hero finds there are other survivors, and alliances are made to fend off ghastly mutants or each other. Further wrinkles come into play when those alliances shift and betrayals start, and it becomes a last-ditch effort for survival for the protagonist(s).

We've seen this scenario plenty of times in the sci-fi genre, but not quite like "The Quiet Earth," New Zealand's answer to the apocalyptic last-man-on-earth nightmare. The film opens with a long shot into a rising yellow sun before settling in on the naked cadaver of Zac Hobson (the late Bruno Lawrence), a New Zealand-bred computer techie who had been working on "Project Flashlight," an American-financed experiment to build an energy grid that would allow war planes to circle the globe indefinitely without the need to refuel.

Only thing is, at 6:12 A.M. on a clear July morning, everybody and every living thing on earth simply disappears. So when poor Zac Hobson gets himself together and toots his car's horn in futility trying to get an answer, he finally realizes after much contemplation of the implications of his actions in science that he really is the last man on earth. So for about 45 minutes, it's the Bruno Lawrence show, live and uncut, as he takes up residence in New Zealand's Playboy Mansion, tries on expensive wardrobe he could never afford in his previous life, gives Caesar-like speeches to cardboard cut-outs of famous people (Adolf Hitler, the late Pope John Paul II, Queen Elizabeth) and proclaiming himself God, and takes time out to go skinny-dipping in the Pacific Ocean.

Zac still feels he's not alone, however, like somebody is just lurking in the shadows watching his every move. So even though there are no flesh-hungry mutants chasing him, he instead finds lovely Joanne (Alison Routledge) and the two strike up a friendship that seems to never blossom into something more. The two go about trying to find other survivors and never luck out, and sleep in other people's houses as they travel the countryside and pondering what to do in a world where there is no one else.

A third person is found, a paranoid Maori trucker named Api (Pete Smith), who's secretly got an arsenal. Zac, using his computer and technological skills to his personal benefit, deduces that the experiment he'd been working on somehow backfired, causing a rift in the universe that fundamentally altered space and time and ultimately wiped out every living organism on the planet, and the end of the world is only the beginning of something much more grave.

This is a chilling and engaging sci-fi thriller. While not a splash in the United States, it is obvious that this movie has a strong allegorical subtext about the place of man. Our hero played by Bruno Lawrence gives the best performance of the three leads. We see his despair over living alone in a world and it is only through his extended bout of isolation that he starts to learn the meaning of companionship. We see his longing for more human contact, his contemplation of suicide once or twice, and his ultimate descent into going bonkers. There are also some slight comedic moments with Lawrence, but mostly only lead to some other tragic elements. It's one of the great performances from an actor who would never know fame in his lifetime.

The director is Geoff Murphy, working from the novel of the same title by Craig Harrison. Murphy keeps a nice pace for the first two acts but lets things slip a little when we realize that Zac Hobson is not the only man alive. I guess that's the problem with end-of-the-world-and-am-I-the-last-man-alive movies, you just can't let the hero be the last man on earth. Murphy does have a strong visual sense, including a number of wide-angle shots of the exotic New Zealand landscape, and there is one particularly spooky sequence where Hobson searches through the wreckage of a downed airliner only to find seat-belts wrapped around the waists of bodies that aren't there.

Apparently, "The Quiet Earth" is slowly building up a nice afterlife on home video and DVD. It is clear that it's working from a limited budget but those limitations do give rise to an impressive first half of a gloomy movie. It was obviously influenced by films such as "The Omega Man" (1971) and there is even a slight gag riff from "Dawn of the Dead" (1978). I can also see its influence on more recent films as well, including "28 Days Later..." in 2002. My only gripe with these movies is as follows: I only wish that in the next movie, the last man alive could really be the last man alive for once.

Review by dee.reid from the Internet Movie Database.