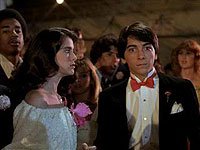 Another teen comedy in the same mould as Weird Science, Porky's, Screwballs and Bachelor Party, Zapped! is perhaps the tamest of the bunch. Scott Baio - better remembered for his role as the Fonz's cousin in Happy Days - has a rare leading role as a high school science geek. The most recognizable face in the supporting cast belongs to Scatman Crothers. Hard to believe that two years on from his career-defining appearance in The Shining, Crothers can be found slumming in a simple-minded tit-flick like this.

The story finds Barney Springboro (Baio) accidentally creating a mixture which causes people to develop telekenetic powers. Pretty soon, he realises that his new talent can be put to a variety of uses - wallcharts fall on teachers' heads; Barney uses his ventriloquist-dummy to terrorize his mother; and at school baseball games, the ball does some mysterious things. But Barney's greatest use for his new skill is to undress busty girls just by thinking about it!

As silly and immature as it sounds, Zapped! is also totally harmless. Young adolescent boys will probably enjoy it, with its moments of smut and nudity. In real terms, it's a pretty poor movie but serious criticism seems rather pointless as the film never aspires to be anything more than what it is. Half-Porky's, half-Carrie, with plenty of good-looking women exposing themselves, a limp plot, excrutiating special effects, and utterly indifferent performances. If you're a male, aged 12-16, I can think of plenty of reasons you might want to watch Zapped! If you're anything else, my advice is simple: don't watch Zapped!

Review by Jonathon Dabell from the Internet Movie Database.