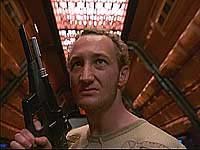 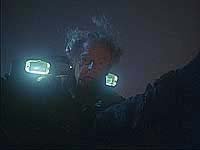 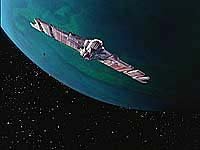 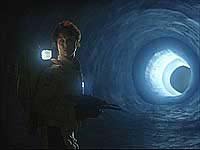 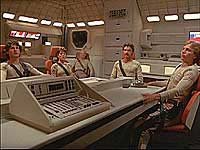 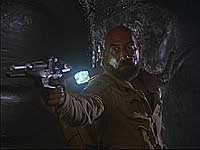 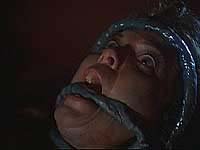 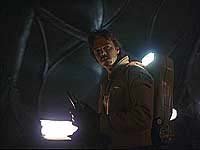 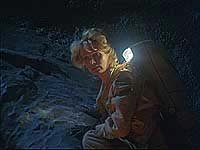 Well judging by the poster for this Corman gem you can expect to see lots of huge freaky monsters attacking scantily clad ladies on some kind of prehistoric looking alien planet. I really don't understand how this poster even exists as the film is completely and utterly the opposite to everything that poster stands for! it looks like a Doug McClure movie poster.

Anywho I had never seen this film until now so I was unaware of what to expect, again judging by that movie poster I was kinda thinking it was an 'Aliens' type affair...oh well. The film certainly looks and feels like 'Aliens' though that's for sure, holy sputum! the visuals virtually throughout the entire film are near identical! This may well be down to the fact James Cameron was the Production Designer and Second Unit Director on this and he clearly took these ideas and recreated them for his now famous Alien sequel masterpiece.

Indeed this film does look very Cameron-ish in some scenes especially at the start where we see the crew leave the mother ship and search the alien surroundings in their very smart yet workman-like looking space suits complete with light generating backpacks. Hell even the alien planet is a cold dark misty wind swept barren land with mountainous jagged rocks that looks like an early 'LV-426'. Then you have the huge alien pyramid type structure that kinda looks like a concept pinched for 'AvP'. So the more I watched the more I found myself comparing this early Corman sci-fi to Cameron's future work, on top of that much visual style has been borrowed from Ridley Scott's 'Alien' with the blue-collar space crew on board their slick yet heavily metallic industrial interior designed craft and its long twisting corridors. Not quite the oil rig in space scenario, there is more of a dark Battlestar Galactica feel to it in my opinion, and lets not forget the character of 'kore' the cook who is similar in plot development to 'Ash'.

So off the crew go into the unknown looking for survivors of a ship that crashed on this mysterious planet. The setup was certainly looking good for a last man standing type thriller and you do get that to a degree. What disappointed me was the fact the plot doesn't revolve around alien creatures killing off the crew but monsters created by the crew themselves, their own worst fears made flesh like some cheesy Red Dwarf episode. What was a little intriguing was the notion that this huge pyramid where everything takes place is some kind of adventure playground for children of an extinct race of beings. Apparently they would test their ability to control fear within the pyramid...for some reason. Notice the 'AvP' similarities here also huh huh!

So this all leads to various creatures and bizarre scenarios that kill off the crew one by one, some being quite cool effects wise and some not so. The silliest and most controversial (at the time) being a scene where a massive maggot rapes one of the female crew to death...yet she kinda enjoys it in the end. Totally stupid and uber cheesy to watch, makes you wonder what the fuss was all about, but there is some nice use of stop motion and a big rubber slime covered puppet. Most of the time you don't fully see the things killing people, you merely get glimpses, which does work but I fear that may be because most of them looked pretty hokey. The main talking point of the film (apart from the horny oversized maggot) must be the gruesome gory effects you get sporadically. Some lovely use of good old fashioned hands on effects with dummies, fake blood and exploding body parts, again it all looks pretty dubious now of course but back in the day it would have been horrific.

I did start out enjoying the film with its 'Aliens' look and feel but as time went on I grew more and more bored with the ever growing 'HellraiserEvent Horizon-esque' route it took. What I didn't get on with (and still don't really get) is what was the Master character all about exactly?...who? why? how? etc...and how about some more info on this extinct race and their big pyramid playground of death huh. Plus I never really got behind any of the characters either, didn't really bother me if they lived or died and didn't really like any of them. You never find out what happens to Englund's character and what was all that crystal star throwing malarkey with Haig's character? why was he so obsessed with his precious crystal ninja stars?

Everything is a tad rehashed from Ridley Scott's space opus...especially with the discount Nostromo crew and I didn't really like the question raising ending or plot progression (how exactly did 'Cabren' kill the Master??! what was all that lighting stuff? beats me). But yeah on the other hand I did kinda like it mainly for its visual artistry and glorious hands on effects, on that front its brilliant.