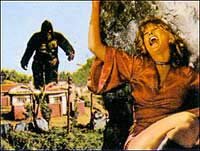 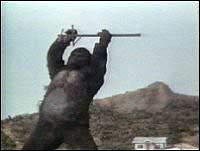 Nowhere near as good as "Mighty Peking Man" as far as King Kong rip-offs, "Ape" is good to look at just to see the fair miniatures and little else. The best "bad" hilarious movies are those that never intended to be that; in "Ape", the Ape gets mad gives the finger in one scene, obviously in a deliberate attempt for laughs, which in turn, makes it pretty unfunny.

The sound effects are BAD, there's a decent 'bad' fight with a giant shark which couldn't look much more fake if they tried, plus the Ape trashes a few buildings. If you are a giant monster film fan, this probably won't get more than a few viewings in your entire lifetime but it's good to watch and take off your list of films to see, plus to examine how badly this one was made.

Review by thecat72 from the Internet Movie Database.