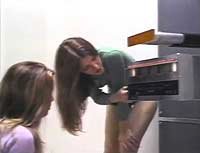 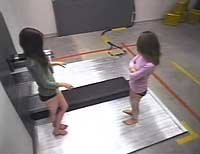 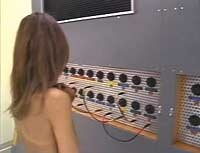 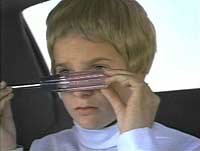 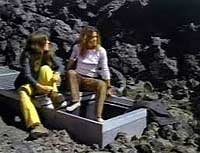 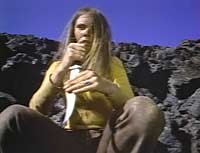 Well, it appears Idaho Transfer splits the viewing community in half. I, personally, join the authors who conclude that this is a "must see". Not enough praise can be heaped on this exceptional movie, and most of the previous comments fail to recognize the outstanding quality and achievement of this work of art.

What has been criticized or perceived by some -- perhaps being used to the rather typical tempo and intellectual challenge of mainstream "science fiction" like the likes of "Superman I", or even "Star Wars", for that matter -- as the supposed "starkness" or "flaws" or "lack of effort" or other shortcomings of the film, on second look (or thought) will appear not due only to possible involuntary restrictions (budget- or otherwise), but intentional, virtually ascetic artistic aesthetic. Which makes it even better. Easily (as far as I can tell) this movie is one of the subtlest, yet most impressive movies ever made -- in terms of personnel, acting, story, depth, dialog, directing, editing, density, composition, music(!) and emotion. (Not to mention: budget.) And: it is sexy(!). And: it is scientific! (kind of). If there are movies that deserve the term "Gesamtkunstwerk", this certainly is one of them. That, of course, will even include the main titles graphic design.

The original video-box jacket describes it as "being graced with a slow severe beauty" with "a quiet edge of panic" (Jay Cocks, Time), which for some might almost be an understatement. The movie has certainly "haunted" me -- much like movies of a similar breed e.g. "Silent Running" (Douglas Trumbull, 1972). I vaguely remember having seen this movie for the first time, more or less by chance, as an adolescent (yes, puberty) on German public television, and for many reasons it has never completely disappeared in the old depths and memory layers of my emotional brain. Although, I had even forgotten its title for quite some time...

There is a chilling (yet warming) sense of beauty, doom, hope and desire that completely pervades this movie. An incredible texture of intellect and emotion. No single frame can (should) be omitted, every image fits a story. It is not exactly about potatoe(s), or is it? Coincidentally, probably, it is some kind of science fiction. Well, it is all about an ominous future "eco-crisis" (that, true, is never completely explained nor witnessed). But as this movie is also about time travel -- into a future we cannot know, but that we constantly (re-)make AND change today -- how couldshould we possibly know exactly what will have had happened? And still, there are sufficient, plenty, hints: fossil fuels? carbon lifeforms? little idiot hands? using everything up? ring a bell? to mention just a few. Every man will find her own...

Even if one might not get philosophical while watching this movie -- there are so many things to enjoy in it. (It is slow paced at times, but not without a reason. It takes its time to show-time.) The cinematography (landscapes!), the special effects (almost unnoticeable, but incredibly effective!). And, really first of all, the fantastic acting (or should one say: just being?) of the entire cast. It needs to be mentioned that Peter Fonda used lay actors almost exclusively (except for Keith Carradine and Ted D'Arms), and every one of them is a perfect fit.

The lead role heroine (Kelly Bohanon as Karen) is nothing short of unforgettable. Total, blissful, unselfconsciousness. Her compelling presence and natural radiance, her beauty and (naked) naiveté, her bitchy defiance and passionate strength, lend a lingering infusion of pure, subtly explicit, sexuality to this movie. Which is, after all, about a project that wants to save civilization (the world!!!) against all odds. A kind of hippies' Noah's Ark. The snake and the apple -- a coincidence, guess not, but artful reference and association... The film snuggles up nicely with the idealism's of the 60s (it was released in 1973). If any dialog sounds cheesy, just think for a moment, imagine, if this was really happening(!?!). Again, some of this "cheesy-ness" is well on purpose (like the language of the hippy-gypsy hitchhiker guy) and carries that budding sense of eco-awareness of the 70s.

There are many more angles to this movie, most of which can't really be described (or understood, for that matter). Well, yeah, really, go get it, go see it! Unfortunately the (DVD) transfer of Idaho Transfer is far from satisfactory, actually, it's not much better than the VHS tape. If you can get a hold of the tape, get the tape (ISBN 1 -55607-244-9)! The extra-plus-bonus is an introduction by the man himself: Peter Fonda.

Review by kreitmeyer from the Internet Movie Database.