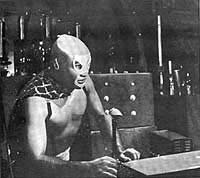 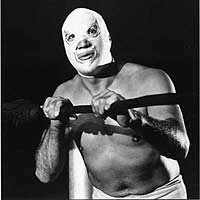 My introduction to the Santo cult proved to be a somewhat disappointing experience. Santo is not so much a Mexican Super-Hero as a Mexican Bruce Lee. Instead of kung fu, we are treated to wrestling. Mucho lucha. Demasiado lucha! It never stops. Santo cannot step into a room without stepping into the fray. I admit it was well staged, but the sound effects were overdone. I liked the girls best, especially Belinda Corell. On the other hand, the male Martians were totally unconvincing. Complete with ridiculously fake wigs, they looked about as much like men from Mars as refugees from Central Casting. Not that the rest of the players were much better. Only the always reliable Manuel Zozaya (who rarely received decent roles matching his abilities) as the professor and the impressively voiced "Picoro" (doing his customary stint as the ring announcer) stood out in a very mediocre cast.

Production values were also second-class with ho-hum special effects that wouldn't gladden the hearts of a group of seven-year-olds; plus competently routine photography by Jorge Stahl (who did such good work on Henry Hathaway's 1954 Garden of Evil); and all topped off by capable but blissfully unimaginative direction from that veteran workhorse in Mexican cinema, Alfredo B. Crevenna (who helmed no less than 150 features between 1945 and his retirement at the age of 81 in 1995).

Sci-fi fans will be hard pressed to find anything to cheer about in this effort. It's the sort of film that a quickie serial producer like Columbia's Sam Katzman would have been proud of, but it didn't strike many chords with me.

Review by JohnHowardReid from the Internet Movie Database.