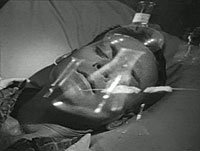 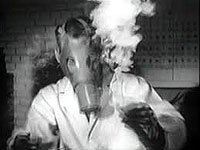 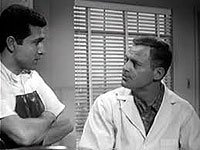 Not all that bad horror, if you take it for an unintentionally comedy, film with it having a former member of the three stooges as well as the hilarious Stinky Davis of the Abbot & Costello TV show Joe Besser as a gas station attendant as well as one of the "Hands of Death's" victims. "Hand of Death" with it's star John Agar as the obsessed and crazed scientist Alax Marsh who ends up turning into what looks like a overripe avocado. Marsh runs and drives around L.A doing his best to terrorize everyone he comes in contact with but mostly leaving them in a state of total bewilderment trying to figure out just what the hell he, or it, is.

Trying to perfect this nerve/hypnotic gas for the US military that would not only knock out anyone who's affected by it but turn them into obedient zombies Marsh working day and night in his out of the way desert laboratory. One day Marsh falls asleep and knocks down a bottle of the nerve agent and gets infected by it. The gas gives him the power to kill by just touching anyone. Later Marsh develops a leprosy-like appearance that even his own mother would run from.

Killing everyone he as much as touches Marsh trying to hide his identity, as the killer Avocado Man,just puts on a Humphrey Bogart like trench-coat and fedora hat thinking that would be enough to fool anyone! One of the craziest scenes in the movie is when Marsh pops into a taxi cab trying to communicate to the cabbie ,Fred Korne, where he want's to go, to the beach in order to get a suntan? The taxi driver turning around and seeing this weird and grossed-out guy isn't at all surprised or even scared at how he looks! Is he used to picking up customers like him,looking like vine-ripe avocados,in the city's many farmers markets and fruit and vegetable stores?

Trying to contact his girlfriend Carol ,Paula Raymond, so he can take her, I could only guess, to the local drive-in to see someone who looks a lot like him his screen hero "Ceature from the Balck Lagoon". Marsh later gets to where she's hiding from him at her friends Tom Holland's, Stephen Dunne, beach-front home. As he breaks in Carol calls Tom gets the police who both come to her rescue. Marsh running along the beach and trying to take a dip into the ocean, with his heavy and bulky street cloths on, is shot dead and left floating on the waves as the movie finally comes to an end.

Hard to believe that anyone would have been insane enough to take, much less pay for a movie ticket, "Hand of Death" seriously back in 1962 when it was released. "Hand of Death" looks like it must have been the final movie that was part of a quadruple feature following even the cartoons and coming attractions where by the time it came on the screen there was almost nobody left in the movie-house to watch it. Which may well have been the best thing that could have happened to the professional careers of everyone unfortunate enough to be in it.