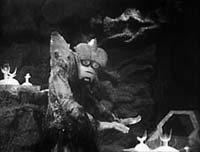 The Phantom Planet was one of the many victims of TV's Mystery Science Theatre 3000 back in 1997 where its failings provided a rich source of comment. When watched away from such mockery, it doesn't prove the tedious slog that other MST3K choices have sometimes proved in their original, un-tampered versions. A sucker for 1950s and 1960s space movies - Destination Moon, Conquest Of Space and the rest - I have a weakness for those films informed more or less by the hard science of the times. In which men risk space travel in curiously stripped-down boiler-tank interiors, served by a few lights on a console and clunky readouts, belt-up in space recliners, and when they land, high concept meets low culture.

Having said that, most of the 'science' in The Phantom Planet occurs at the beginning, and again at the end, and what falls between, despite some speculations about the revolutionary properties of gravity, is more than a little daft. Director William Marshall, whose only other credits were two late Errol Flynn movies, returned a decade later for this last effort, based on a script by the producer. Essentially a love triangle set on a Lilliputian planet (revealing this won't spoil any of the wooden drama it attempts) The Phantom Planet's early scenes are reasonably proficient and suffer most with the benefit of technological hindsight. But once hero Captain Frank Chaplin (western regular Dean Fredericks) lands on asteroid Rheton, any scientific integrity deflates as quickly as the spacesuit he wears, the astronaut shrinking down to local size courtesy of the planet's uniquely affecting atmosphere.

If the script had called for Chaplin to remain an intergalactic giant among alien pygmies, then perhaps the film's central triangle would have been more problematic and interesting. But, as it turns out, the interpersonal relationships and jealousies engendered by Chaplin's unscheduled arrival are the most mundane elements of the story. His principal love - an infatuation, incidentally, sprung upon the viewer at a very late stage - is a mute girl, Zethra (Dolores Faith). Along the way he is also tempted by Liara (Coleen Grey), the daughter of Rheton's ruler Sesom (an elderly Francis X. Bushman, here reminiscent of the controller in Plan Nine From Outer Space). The fly in the ointment is Herron (Anthony Dexter), jealous of Chaplin's attractions to his preferred mate. Thus all the worthy speculations of the opening space drama are reduced to an off-world soap opera.

Rheton is a peculiar place, an asteroid-deemed-planet by dramatic contrivance and insistence of its inhabitants. Despite a surfeit of women, there are relatively few people around outside of one or two gatherings. In environmental styling it often reminds one of the early Star Trek, with severe (i.e. cheap) décor, moulded rock faces and limited vistas. But it has its attractions, apart from the feminine majority: for action fans there are the 'disintegrating gravity plates'. These form a key part of a scene where, in echo of Kirk's bare-chested arena battles to be on TV a few years later, Chaplin and Herron fight a duel to the death. They also lead to the demise of the film's principal alien, a stranded representative of Rheton's principal enemies and potential destroyers, the Solarites. Played by none other than Richard 'Jaws' Kiel in monster costume the Solarite is, despite all efforts, relentlessly un-scary and cheap-looking, shambling around before attempting to grope Zethra.

Bad movie lovers will find a lot to enjoy in The Phantom Planet even away from the marauding Solarite terror. The rifle shot sound effects ringing out in space during the climatic space battle for instance; the Solarites' burning cotton wool ball spacecraft (an effect worthy of Edward D. Wood), as well as the earnestness of all involved. Then there's clunking pieces of dialogue. A solemn narrator, heavy on the significance, starts and ends the film. It is he who firsts suggests, with a heavy hint, that there might exist races both larger and smaller than our own, and that mankind might only be "unimportant driftwood... floating in the universe." This faux high manner emerges a few times elsewhere in the film, as when Chaplin's doomed co-pilot speaks directly to camera and informs us solemnly that "Every year of my life I grow more and more convinced that the wisest and best is to fix our attention on the good and the beautiful" - a quote apparently lifted wholesale from a more prestigious source, and here ludicrously self-important. Incidentally, the same speaker is responsible for one of the movie's best moments: during his untimely demise, drifting helplessly off into the void and realising the inevitable, he relaxes calmly and starts off on the Lord's Prayer.

I've given this film an above average score as, for those with a taste for this type of thing The Phantom Planet remains entertaining, if daft. There's an innocence here, typical of the period, which makes up for shortcomings and that's helped along by Marshall's adequate direction. And ultimately I suppose such innocence can be seen as a legitimate response to a universe that has become more confusing and complex a generation on.

Review by FilmFlaneur from the Internet Movie Database.