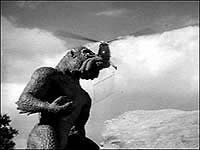 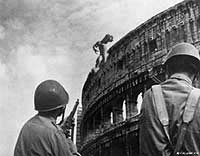 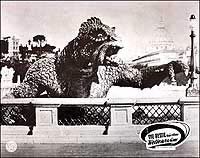 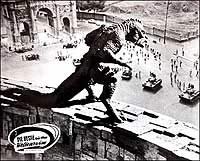 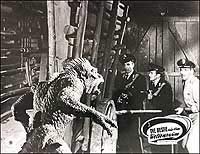 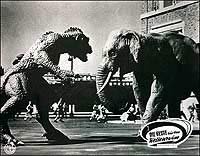 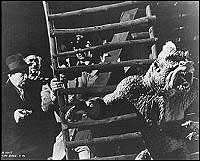 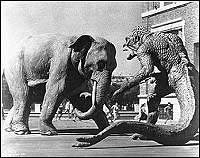 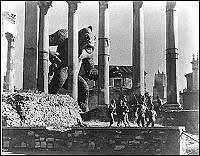 20 Million Miles to Earth is written by Bob Williams and Christopher Knopf from an original treatment by Charlott Knight. The film was produced by Charles H. Schneer's Morningside Productions for Columbia Pictures and directed by Nathan H. Juran. It stars William Hopper, Joan Taylor, Frank Puglia and a Ymir, a creation by stop-motion maestro Ray Harryhausen.

The plot sees an American rocket ship on its return from a mission to Venus, crash land in the Mediterranean Sea near the Sicilian village of Gerra. Some fishermen aid the stricken ship and manage to pull free two survivors, Colonel Bob Calder and Dr. Sharman. Once Calder recovers it becomes known that an important canister brought from Venus has not been found after the crash. However, Pepe, a young fisher-boy who was present at the rescue, found the container and sold its rubbery contents to his Zoologist friend Dr. Leonardo. Whilst in the hands of Dr. Leonardo the gelatin like substance gives birth to a tiny Venusian bipedal creature called a Ymir, but it doesn't stay tiny for very long...

As the work of Dynamation legend Harryhausen got more accomplished and praised, it became a standing joke that his creatures were better actors than most of their adult co-stars. That's never more truer than with 20 Million Miles to Earth, where one of his best creations takes centre stage and acts the actors off the screen. It's also true that some, not all, of Harryhausen influenced movies are just thin clothes lines to hang his work upon. Thankfully that isn't the case here, for although it's homage a go go to King Kong, where Harryhausen hero Willis O'Brien pioneered the stop-motion process, Juran's movie has intelligence within its on the surface monster on the rampage plot.

There's nothing totally new in this genre piece about mans pursuit of more via technological advancement, the unremitting pursuit of science as a tool or plaything. So where Jeff Goldblum mused in Jurassic Park many years later, about that nobody stopped to ask if they should be tampering with science and nature, so it be here. Where the Ymir creature is whipped from its home planet, starts off harmless, afraid, puzzled and very much a stranger in a strange land, yet is provoked into an aggressive state. This even after we are told that the Ymir only attacks if being attacked first, cue next scene as man who said it starts poking confused creature with a big pole! You would laugh if it were it not so adroitly cunning.

Not only does the big question of "why?" loom large as things spiral out of control here in Italy, but animal rights are also given a poke, as is a nice thread as regards guns. It's just too cute not to mean something as Pepe, quite the capitalist indeed, wants to be an American cowboy. Buying himself a Texas hat he happily starts clicking away with his toy guns like some Western cowboy of the silver screen. You just know what is around the corner, soon enough the mighty army are throwing everything at poor Ymir, guns, tanks, bazookas, flame throwers, you name it and the mighty military are using it. America flexes its weaponry muscles on foreign soil, indeed. Against something that they are responsible for being here in the first place! You would laugh if it wee not so cunning...

Of course the trump card here is the creature itself because it shows a number of basic emotions. Harryhausen works his magic as Ymir goes through the various stages of its sad stay on Earth. From its brilliant birthing sequence where it rubs its eyes and shies away from the light, to the rousing finale at the Colosseum where rage and anger has fully taken over as the creature fights for its life; on a planet it doesn't know or wanted to be on anyway. This "thing" may eat Sulphur, but it has one hell of a personality thanks to Ray, who sat at his table for days on end creating these wonderful sequences for us to enjoy. Letting the creature breath, flick its tale and wrestle other animals. Quite a character indeed.

No personalities with the human cast though, Hopper (son of actress and gossip columnist, Hedda) is lantern jawed adequate enough for the role, and Taylor is pretty but playing a totally perfunctory character. While the Italian characters are as stereotypical as they come. But just like King Kong, 20 Million Miles to Earth has many fans who just adore it. More so now as advancements in DVD technology have seen remastered releases (even with a colour choice that's not bad at all) reach a new and interested audience. A fine fine film that rises above its failings due to a wizard at his work table and some brainy cheekiness from its writers.

Review by Spikeopath from the Internet Movie Database.