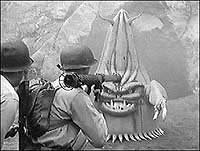 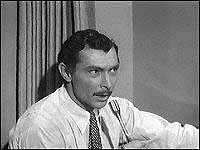 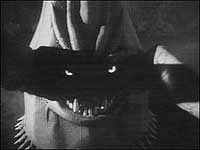 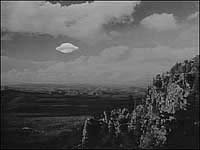 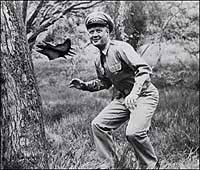 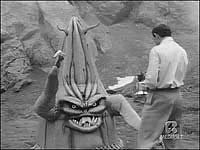 It Conquered the World seems to be trapped in a sort of sci-fi Twilight Zone. Though it has a sizable cult following that appreciates its quirky genius, there are many genre fans who dismiss it as b-grade schlock. Rarely mentioned on lists of science fiction greats from the fertile 50s, the movie nonetheless survives and continues to entertain genre fans today. That It Conquered the World is a b-movie is undeniable--indeed, it is a near-perfect example of the type--but its b-movie status doesn't mean it can't be good. And it is actually quite good.

The story of an alien intelligence that takes advantage of a disillusioned scientist to plot a takeover of Earth, It Conquered the World is incredibly ambitious. The globe-spanning plot was typical of science fiction from the period, but director Roger Corman didn't have the budget of War of the Worlds or Earth Vs. The Flying Saucers. Corman had to rely on imagination, and his audience's willing suspension of disbelief. Yes, the limited sets and small cast at Corman's disposal don't always do the story justice--crowd scenes are not particularly crowded, the military response to the emergency is about 1100th what it should be, etc.--but as a result the more intimate drama becomes a fascinating character study, and the multi-layered plot works as both Cold War paranoia thriller and introspective morality play. Corman and writer Lous Rusoff (and an uncredited Charles B. Griffith) are working with a complex, thoughtful plot that belies the movie's b-level reputation.

And the cast does wonders with the story. Headliners Lee Van Cleef and Robert Graves are solid as the scientists whose friendship turns bitter once it becomes clear that Van Cleef has sold his soul to the devil in exchange for revenge upon a cruel world. The beautiful Beverly Garland is often singled out for her outstanding performance as Van Cleef's desperate wife, and her nuanced portrayal of a woman trying in vain to pull her husband out of the pit is indeed excellent, and with her gorgeous looks, charm, and a killer scream Garland is one sci-fi's earliest great scream queens. Often overshadowed by Garland's performance, Sally Fraser's role as Graves's benighted wife is nearly as important to the plot, and Fraser's transformation from a caring, decent woman to alien-possessed temptress is highly convincing. Dick Miller, a genre stalwart, plays an army sergeant whose platoon is hunting the alien down...but what can they hope to do to "It" if they find it? Critics often blast this movie's special effects, and there's no denying they really aren't that special. But the script doesn't demand a lot of dazzling pyrotechnics, except for the climax, and the lack of high-end spectacle doesn't really take anything away from the drama. The creature design for "It" is much-maligned, but there is something wonderfully malevolent about "It" that overcomes any shortcomings. In any event, "It" spends most of the film lurking in the shadows, where many cinematic monsters are more frightening anyway. Despite the lack of sophisticated FX, even by 50s standards, the story itself draws you inexorably in, and the effects, limited as they are, nonetheless work within the context of the overall plot.

Beyond the natural problems generated by the miniscule budget--most of which Corman manages to overcome--the film's biggest problem is pacing. The script, character driven as it is, is necessarily rather talky. Much of the dialog is vital to the surprisingly philosophical plot, but the relative dearth of action is a genuine weakness, and the film does feel rather longer than it really is. While there are moments of humor, the script generally takes itself quite seriously, and the performers do a good job of avoiding the temptation to surrender to parody.

It Conquered the World is hard to find these days, but if you can locate a used tape or catch it on late-night TV there are few sci-fi gems from the great 50s that can equal its ambition and creativity. Well-written, competently acted and imaginatively directed, It Coqnuered the World is one of the best b-movies ever made.

Review by Sean Jump from the Internet Movie Database.