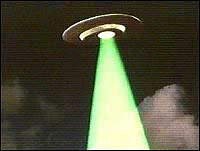 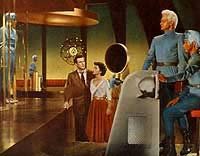 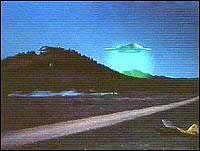 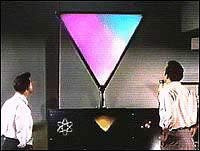 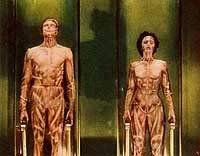 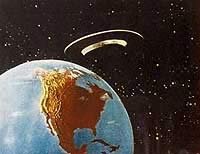 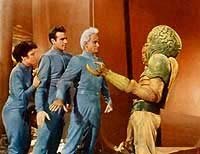 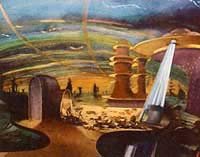 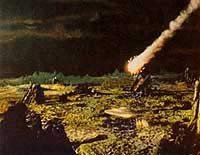 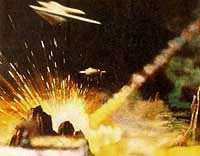 The film divides itself more or less clearly into two parts. In the first part, electronic genius and atomic power researcher, Rex Reason, is challenged by an unknown source to build an interociter. He successfully passes the test. The interociter acts like a big, triangular TV except that it has a self-destruct mechanism and can emit deadly rays that melt lead. When Reason turns it on, he is able to communicate with Exeter (Jeff Morrow), who describes himself as "a scientist like yourself." Morrow invites Reason to take a trip on a mysterious, pilot-less airplane, which he does. The plane lands at a fully equipped laboratory complex which houses a handful of the most famous scientists in the world. All of them seem to be working on the conversion of matter into energy. Morrow warns them not to discuss their work with each other and, in fact, the place is a bit like a fancy prison. Reason and another scientist, Faith Domergue, are spirited away in a space ship and the other scientists destroyed.

In Part Two, we get a load of the flying saucer's innards, which have a familiar look about them. These plastic tubes come down over the occupants and rev up their ability to withstand pressure on the planet they are heading for. Similar tubes prepared the crew of the ship in "Forbidden Planet" and I don't know how many times Captain Kirk and Scotty went through them. Metaluna, the planet on which they land is in sorry straits. It's under constant attack by meteors guided by space ships from the enemy planet of Zygon. It's only defense is an ionization layer maintained by nuclear power, and Metaluna is fast running out of energy, which is why the earth expedition was mounted. It turns out to be too late to save Metaluna. Only Morrow, Reason, and Domergue are able to escape in the saucer and return to earth, where Reason and Domergue land safely and Morrow does not.

Part One is the more interesting of the two. I kind of enjoyed the way Reason responded to the challenge of building an interociter from a schematic diagram the size of a football field. "Where do we start?" asks his assistant. "Right here," replies Reason, planting his fingertip firmly on a sketch of what looks like a power tube. And the scenes at the laboratory complex were fun, too. Morrow keeps complimenting the others on their "curiosity" but they didn't seem to have much in the way of curiosity to me. The first thing I'd have asked upon landing was how come Morrow and his henchman have such terribly big heads. The gradual realization by the earth people that not all is as it seems, is well done too, except that it's rather brief. Reason asks Morrow over dinner, "How do you like Mozart?" "Mozart?", says Morrow, "I don't think I know the gentleman. Oh -- you mean your composer." "Our composer?", says Reason. "I'd have thought Mozart belonged to the world." It's a nice little touch, a snag in the texture of conventional life, like catching your coat sleeve on a nail, but it's about the only one. It needed more incidents like that, so that the suspicion would grow. As it is, it's already there, full blown.

Part Two is less interesting because there are few surprises and little to wonder about. Everything seems overwhelmed by the special effects. Why do all the inhabitants of Metaluna speak English? And why is the name of the planet in Latin. Why does Exeter have such an echt-British name? And why is there a war between Metaluna and Zyglotz or whatever it is? Now THAT'S an interesting question. All these eggheads on two planets who can zip between galaxies as easily as you and I take a spin in the car -- and they can't help exterminating each other? It's so very Buck Rogers.

Rex Reason is tall, masculine, and has a deep voice. Faith Domergue isn't and doesn't. Jeff Morrow isn't an especially interesting actor but he has the most complex role. He's in conflict with his boss, the "monitor", who is concerned about nothing but saving Metaluna, even if it means the earthlings are expendable, and, on the other hand, his genuine liking for his earthly friends and his worry about their welfare.

Review by Robert J. Maxwell from the Internet Movie Database.