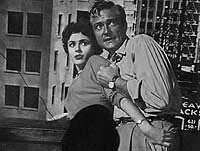 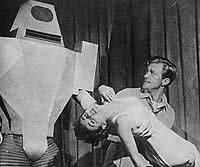 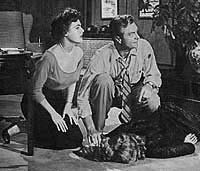 This low-budget 'B' fifties film benefits from a highly compelling opening. A young, single woman awakens in her room in the early afternoon (after a failed suicide attempt), notices that the power is out and that no one else is in the building. Upon going outside, she sees that the entire city of Chicago (which looks suspiciously like L.A.) is deserted. She discovers the dead body of a woman with a look of sheer horror on her face and a man who tells her that he had been knocked unconscious all night after being robbed. The pair desperately search the empty streets (the B&W photography evokes an appropriate bleak mood), trying to figure out what happened. (I always wondered exactly when this was filmed for portions of the town are truly deserted).

Obviously, the city was evacuated for some crucial reason, but they haven't got a clue. Many of the fifties cold war paranoias come to mind; the atomic age and the UFO scare. Our hapless duo discover another couple, a pair of rowdy partiers who decided to stay behind and go bar crashing as well as a frightened, pathetic man who tells them that he's seen more dead bodies with the same horrified expressions on their faces. Then they see a huge shadow on a building of something, not apparently human, from the nearby roof. An ominous moment, reminiscent of the lurking shadow of IT! THE TERROR FROM BEYOND SPACE.

The hapless group takes cover in a close-by hotel lobby where they find a newspaper stating that a UFO landed outside the city last night. It looks like they really have something to worry about now. The frightened man (the only one without a date) has a simple solution: GET THE HECK OUT OF THE CITY! Before the others can dissuade him, fearing that the outskirts of the city are already surrounded, he dashes back out into the street, only to be greeted by a cyclopean robot who fires a death ray from its orb, prompting him to join the ranks of the rest of the corpses. Realizing that the city is now doomed and that any escape attempt would end up causing them to become additional reluctant members of the corpse club, the two couples decide to hold up in one of the suites upstairs. At least they can hide out first-class.

This film's set up is great, presented in a mysterious Twilight Zone manner. O.K., the robot looks a bit silly, but its bland, expressionless appearence is aloof and somewhat chilling. The fact that its lethal ray will knock you dead without a mark is quite chilling. Throughout the rest of the picture, our heros are helplessly trapped upstairs in the hotel room as the invading robots lay siege on the deserted city (we see only one; remember this is fifties low-budget, an experimental era when the studios snubbed the Science-Fiction and Horror genres and wouldn't invest much money in them).

TARGET EARTH was an old favorite that had great potential. It's unfortunate that about midway it becomes a standard alien invasion tale, lacking the mystery and suspense of the first half hour. However, the performances are good enough that I actually felt dismayed to see a few of the characters fall victims to the death rays. There is a very fifties science-fiction pulp feel to it which generates a sense of paranoia that grabs your interest. Also, this was one of the first of the "characters trapped in a confined, claustrophobic setting as an unknown menace besieges them" genre films; a theme that is reiterated in IT! THE TERROR FROM BEYOND SPACE, NIGHT OF THE LIVING DEAD and ALIEN. This idea is an effective means of creating tense suspense, especially if the filmmaker is restricted by a limited budget. The enclosed tension can produce a certain intimate quality, heightening the characters' interactions, sometimes taking on aspects of a dysfunctional family. Corman applied these methods in many of his early low-budget efforts, often to great effect.

Some of the script flaws are here: Denning (the ideal fifties science-fiction everyman) immediately arrives at the conclusion that the robots are from Venus simply because it has cloud cover, is nearest to us and "could support human life." But these are robots! We never learn why the invasion is being engineered, but maybe that's better for some unresolved mystery always adds a disturbing quality that tears down complacency.

Review by danr51 from the Internet Movie Database.