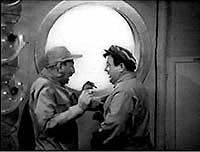 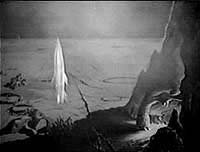 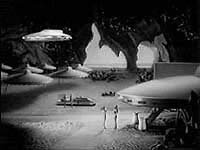 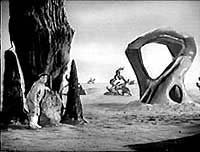 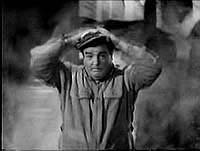 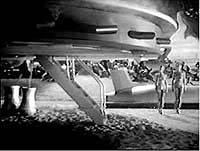 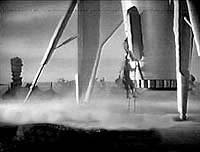 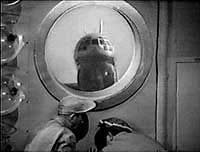 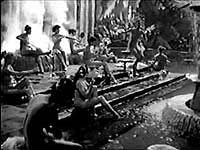 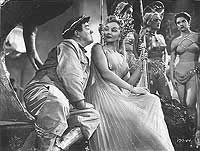 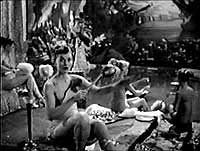 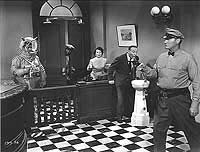 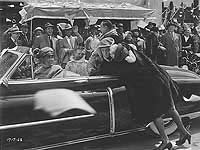 You'll either love it or hate it. There's no in between. It's so outrageous, I have to love it. Never mind that the real Venus is a hellhole, with a sizzling 462 degrees C surface, and a suffocating 96% CO2 atmosphere. Never mind that A&C mistake participants in the New Orleans mardi gras as Martians. A&C rocket off to Venus after tiring of the 'Martians'.

Abbott(Lester) is a maintenance worker at the spaceship research station near NYC. Costello(Orville) accidentally gains entrance to the facility when he hides in the back of a delivery truck, and is later mistaken for a Dr. Orvilla who is due to show up. The two have a mutual slapping session, with the Dr. the winner in the who's who decision. It's decided to let Lou stay and help Abbott. The 2 bring some things inside the spaceship. Lou plays with some switches and buttons, and it's lift off! First they buzz some skyscrapers, fly under some bridges, and even fly through the Lincoln Tunnel! They land at New Orleans, thinking it Mars(mighty fast trip!). They don their space suits and go out. Soon, they see some strange-looking people-like creatures and other creatures. It's the N.O. mardi gras. They fit right in with their space suits. Meanwhile, 2 escaped convicts enter the spacecraft and find a 'ray gun'. They use this to 'freeze' the employees at a bank they rob, then return to the spaceship, along with A&C.

The boys decide to point the spaceship toward Venus. Upon landing, they discover that Venus hosts only beautiful young women(played by Miss Universe contestants). Seems they eliminated men 400 years ago, after it was discovered how to achieve physical immortality and eternal youth. Thus, these beauties are about 400 years old.

Queen Allura(Mari Blanchard) is very bossy and jealous, if exceptionally beautiful. She has the 2 convicts incarcerated. Reluctantly, she goes along with Lou's request to be crowned King of Venus. But, it's only provisional if he doesn't think about the other women(Allura is very jealous and very much a feminist!). To see if he can pass this test, she gives him 3 balloons. If he thinks of another woman, one will pop. Bang! Now, he must pass the lie detector test. A metal chair is wired to produce a current sufficient to cause sparks to fly if Lou tells a lie. He flunks this test also. Thus, Allura says the men have to leave Venus, even if many of the girls want them to stay, at least for a while. Allura also orders that any girl who kisses a man will immediately lose the gift of immortality and eternal youth. One girl violates this decree, and immediately changes into a 400y.o. woman(well, 120y.o., anyway)

At first, the spaceship wouldn't take off for Earth. It was concluded the reason was excess weight. Abbott discovered that Lou had smuggled a bevy of girls into some closets. After they are ushered out, the spaceship takes off fine, and eventually lands near NYC, but not before buzzing some skyscrapers, flying under a bridge, flying through the Lincoln Tunnel, and causing The Statue of Liberty to duck! A big parade is held for A&C, while the 2 convicts are sent to jail. The amazons watch the parade on their video, and Allura sends a congratulatory gift for Costello, but I won't say what it is.

Review by weezeralfalfa from the Internet Movie Database.