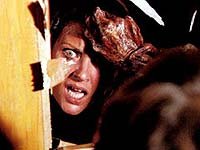 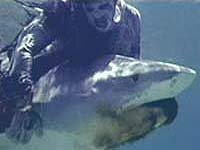 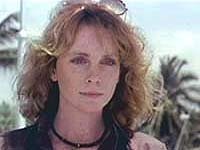 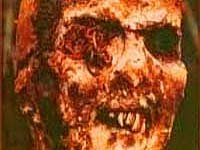 Lucio Fulci's Zombie is a cult classic, due mainly to some infamously gory scenes and odd setpieces. There's not much to say in terms of true quality in the script, since the film doesn't have any pretensions in the first place to be anything more than a zombie thriller. Let me emphasize that this is not as good as George Romero's zombie films, namely Dawn of the Dead and Day of the Dead. But it works as an entertaining, sometimes scary, and sometimes intense gorefest.

The movie begins in a New York harbor, where a boat is found by two police officers. They look around inside and one of the officers is killed by a zombie lurking in the boat. It's dispatched of (or so we're led to think, I'm fairly certain it got shot in the head at the very beginning of the movie) by the other cop and now the authorities are wondering where the boat came from. They trace its possession down to Ann Bowles (Tisa Farrow, sister of Mia), as the boat's owner is her father. She currently knows little of his whereabouts, but does have a letter from him telling her he's on an island.

A curious reporter, Peter West (Ian McCulloch) joins Ann on her quest to find her father, and they receive the help of another couple (Al Cliver and Auretta Gay), who leads them to the island of Matoul. There, they discover that voodoo is bringing the dead back to life and that Dr. Menard (Richard Johnson), a respected scientist, is working on a way to put a halt to this epidemic. But the zombies begin to grow vastly in numbers, and soon the remaining human survivors are left to battle the undead on Matoul.

Lucio Fulci is, in my opinion, not what I would call a very good director. He shows little sign of genuine inspiration or anything innovative. For the first half-hour of Zombie, the film is a crashing bore, featuring lame dialogue and some odd camerawork from Fulci, which consists mainly of shaky close-ups and shaky long sweeping shots. You really have to wonder what the heck the camera must have been attached to because it jostles for the majority of this period.

Finally, when the film's four lead characters begin the journey by boat to Matoul, the film picks up significantly, and Fulci's direction actually becomes competent. The point where interest picks up is when Auretta Gay scuba-dives (topless with a very small thong bikini, no less) and encounters a shark, as well as a zombie, which leads to a weird one-on-one wrestling match between the two (first the zombie and Auretta Gay, then the shark and the zombie). The scene isn't as impressive as many others have said, considering the fact that the zombie seems to intentionally want its arm bitten off, but it's no doubt very amusing and quite amazing to see how the sequence was pulled off.

The next infamous setpiece is Olga Karlatos eye-piercing. Fulci builds this sequence up quite well, creating a good deal of suspense before paying off with a scene that will leave your eye twitching. You still have to wonder why there's no blood coming out from the eye, though, but logic is beyond the point.

The last half-hour builds into the "rollercoaster ride" many are expecting, and Fulci doesn't disappoint when it comes to action and gore. Zombies are bashed in the head with stick, large crosses, shovels, butts of guns, etc. More zombies pop out of the ground in true creepy fashion, and the finale features the remaining humans battling dozens of hungry zombies inside a hospital, using shotguns, pistols, and molotov cocktails, as the undead surround them from all sides. The zombie action is among the best I've seen, about on par with Dawn of the Dead, though still not up to the intensity of Day of the Dead.

The movie has no benefit from such things as a quality script. There are logic leapholes all over the place; the character development is lacking at best and the only reasons you'd sympathize with the characters is because of the terrible situation they're in. Those looking for anything resembling true intelligence as in Romero's zombie trilogy would most likely be insulted by this film.

Zombie just tries to be an entertaining gorefest, and it works that way for the last 23's of the film. It's jam-packed with bloody violence, as well as gratuitous nudity, none of which make this what we'd call a "good" movie, but it nonetheless works at what it aspires to be. The island setting is a benefit, too, and while Fulci doesn't utilize it to perfection, it's still great in creating a tense atmosphere and sense of isolation.

There have been a lot of different statements regarding the pace, as even die-hard horror fans admitted you might have to adjust your sense of viewing or you'll find yourself bored. I don't quite get that, since with the exception of the first 30 minutes, I wasn't particularly bored at all by Zombie. It's simply has too much of a lot of things to be boring at all for the last hour.

Director Lucio Fulci has always gained mixed responses from horror fans, many thinking he was a genius while many others thought he was a hack. I'm actually leaning towards the latter, and though I am recommending this film (strictly for horror fans) and that he does show some genuine ability to direct for the film's last hour, the movie suffers quite a bit because of his obsession with close-ups and sweeping shots. There are other things, too, such as his tendencies to build on some gratuitous and sleazy scenes, such as his close-up shots of Auretta Gay in her thong bikini, which feels like it's just there to make things more appealing to its target audience. Though on retrospect, that might not be such a bad thing since this movie doesn't resembly anything intelligent. There's also the fact that, mostly in the beginning, I thought I was watching a home video. The version I saw this film in had poor picture quality and was in full screen pan-and-scan, so I might give this film another viewing in the remasterd widescreen edition.

The performances are nothing to really note. Tisa Farrow, though obviously meant to be the heroine, doesn't do all that much. It seems she could be a decent actress, but she's saddled with lame dialogue. She'll probably be more memorable in this film as Mia's sister or the good-looking woman who doesn't take her clothes off. Ian McCulloch is so-so as the reporter; he was quite bad at first, but improved as the film went on. Richard Johnson is pretty bad as Menard, Al Cliver is on hand only to kill a bunch of zombies, and Auretta Gay and Olga Karlatos are just there to show off their bodies in nude scenes and add to the gory body count.

Of course, nobody will watch this for the acting. It's all for the gore, which is actually impressively done. The effects, done by Gianetto De Rossi, were quite good (and still are) for its time and is actually better than Tom Savini's work in Dawn of the Dead (but not up to that man's work in Day). The zombies in this film are some of the creepiest I've seen. There's a lot of filth and decay in these zombies, and not in the same manner as the latex-heavy creatures of Day of the Dead. These look more pale and diseased, as well as bloodied. Some have said this is one of the gorier films ever made, and that's a statement I won't contest. Also technically effective is the musical score from two composers whose names I don't recall. It's catchy and works very well during the action scenes.

By now, you'll know whether or not you want to see this movie. If gratuitous gore and nudity (much more of the former than the latter) is up your alley, then I recommend it. Otherwise, I'm warning you, stay as far away as possible, or you'll come out feeling a little dumber than when you began the movie.

Review by jiangliqings from the Internet Movie Database.