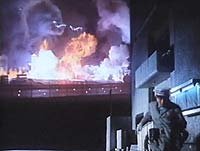 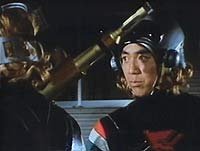 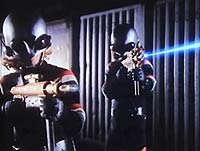 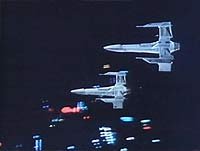 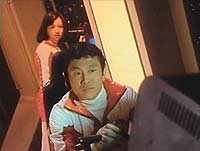 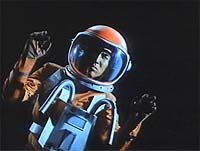 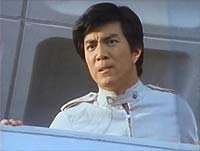 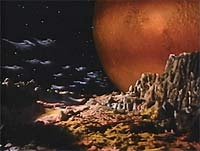 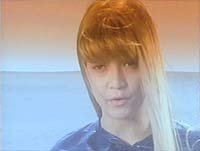 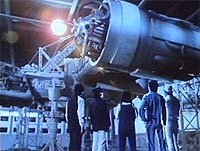 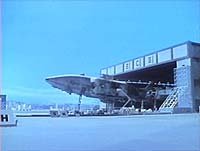 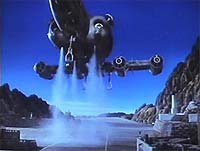 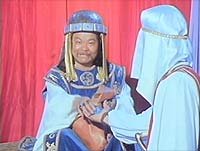 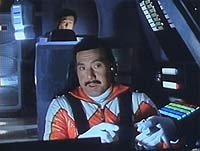 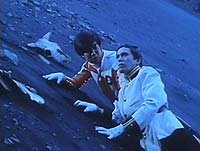 Hey Network TV: Instead of beating the venerable "Fugitive" premise to death (a tv show based on a movie based on a tv show?), why not seek out a tv series that was flawed when originally produced but still features enough good stuff to salvage into a new, better series? Here's a good example- "Fugitive Alien" and it's sequel, "Star Force: Fugitive Alien 2" are goofy, sometimes-incomprehensible "features" made from re-edited episodes of a Japanese TV show. They're hard to watch in their current incarnation, but have interesting premises and fun plots.

The story is this: Our hero Ken is a Wolf Raider. Wolf Raiders are super-strong humanoid aliens who like to invade other planets and run around smashing things. For some reason they wear curly red wigs when they do this, which is pretty bizarre. Anyhoo, during a routine invasion Ken is ordered to shoot a little boy named Ken, and he refuses. In the resulting scuffle Ken accidentally shoots his best friend and flees the evil Wolf Raiders, ending up floating through space in his spacesuit, waiting to die (already this is hilarious!).

Luckily, Ken is discovered by the Bacchus 3, a Star Force spaceship commanded by the jowl-sporting, hard-drinkin' Captain Joe (possible come-back role for Ernest Borgnine here!). Ken is almost immediately adopted by Captain Joe, who hides Ken's Wolf Raider past from the rest of the crew and offers him a job. This delights Tammy, the navigator, and dismays Rocky, Captain Joe's first mate, who tries to run Ken over with a forklift. There are two other guys on the ship, I think one was called Dan or something. They don't do much. Anyway, the crew of the Bacchus 3 goes on one crazy adventure after another while Ken is pursued by Rita (who is Ken's ex-girlfriend and the sister of the guy Ken killed). They visit a lot of different planets, Ken saves everyone over and over again, and eventually he and Rocky get past the whole "forklift incident".

If this isn't a set up for a hit TV series or even a feature film, I don't know what is. It's certainly a more plausible premise a series than "Cleopatra 2525", that's for damn sure. So please, consider "Fugitive Alien". Maybe you could get Timothy Daly to star in the series version.

Review by zmaturin from the Internet Movie Database.